Dog owners are being warned to keep their pets away from food compost bins after two lurchers nearly died from eating toxins. Veterinary charity PDSA says the close call for the two lurchers is a stark reminder of the risks posed by rotting food waste. Cleo and Cobi were left in a life-threatening condition after eating old potatoes raided from a locked compost caddy kept in a shed at their owner’s home in Crewe, Cheshire.

Senior PDSA vet Andrew Hunt said of the incident: ‘As foods rot, the mould that occurs can produce compounds called mycotoxins. ‘These are naturally occurring substances and while some types can be beneficial, such as penicillin, others can be highly toxic to both humans and animals. ‘Cleo and Cobi had eaten a large amount of mouldy food and were suffering from serious mycotoxicosis. ‘There’s no antidote – treatment involves supporting the dogs to try and reduce their risk of seizures and other effects of poisoning while their bodies work through the toxins. 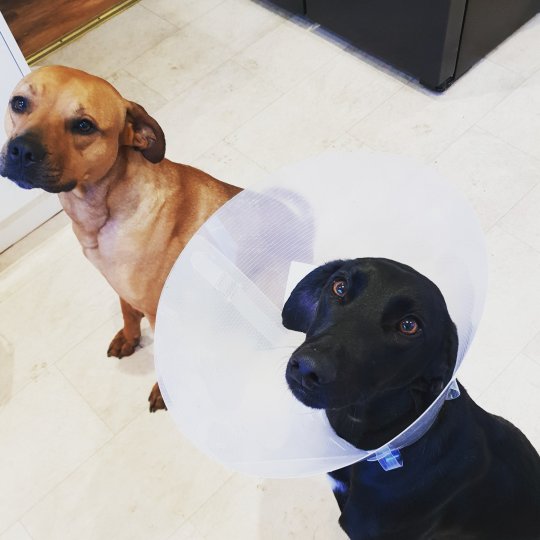 The vets were doing everything they could, but we just had to wait and see how they would respond.’ Both dogs received hours of intensive care, including medication to reduce fits and an intravenous infusion to combat the effects of the toxins, and were put on drips. Recalling the incident, the animals’ owner, Ash Beresford, aged 24, said: ‘I came home to find Cobi shaking with her eyes glazed over, and Cleo was unconscious.