A hero Jack Russell terrier managed to find a newborn girl abandoned in bushes. Macho tugged at his lead to pull his owner off the path and deep into the undergrowth in a park St Petersburg, Russia. The child, too weak to cry and suffering from hypothermia, was wrapped only in a T-shirt. ‘I felt my heart pounding when I saw the baby,’ said the owner, a pensioner

‘As doctors told me later, she must have been crying for hours.’ He picked up the baby and rushed towards a Russian national guard patrol he had seen earlier in the park. The baby weighing 5lbs was rushed to hospital ‘just in time to save her’, said doctors. She was suffering from ‘severe hypothermia’ and a lack of oxygen. ‘It is very unlikely she would have been noticed if not for Macho,’ said a spokesman for the Russian National Guard. ‘This smart dog pulled his owner – much against his will – towards a deserted area of the park. 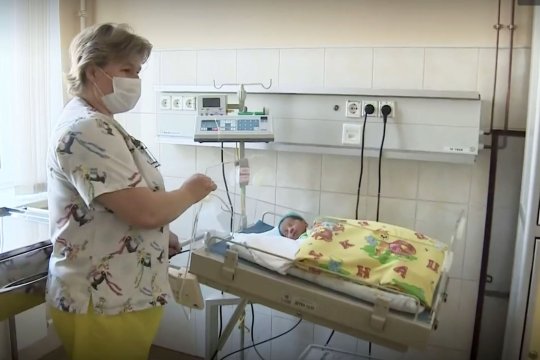 ‘Deep in the bushes the man saw a little something wrapped in a T-shirt. ‘This was the baby girl, who by then was too weak to cry.’ Five days later, medical staff say the child is ‘extremely robust’ and they are now confident she will survive. ‘She is a fighter,’ said a nurse. Police have begun a search for the child’s mother. ‘Our hearts ache for the baby and for her mother,’ said a nurse at Hospital Number 17.