Injured stray puppy hitches ride into town on man’s back

An injured puppy has had an eventful start to life in an adventure that began when he saw a passing cyclist. Mountain biker Jarrett Little was riding with a group of friends when he spotted a stray dog that had been hit by a car. The group gave the pup some water and what food they had on hand before deciding to transport him for medical treatment.

This picture, taken by Chris Dixon, shows the moment that Jarrett put the stricken dog onto his back and rode for miles to the nearest town of Columbus, Georgia, USA. Jarrett recalled: ‘He was thin, hadn’t eaten in a while and had obviously been hit by a car.’ ‘We decided there was no way we could leave him, but we were a long way from town and it was getting dark.’ The only transport available was the bike, meaning the injured dog had to cling on to Jarrett for dear life. 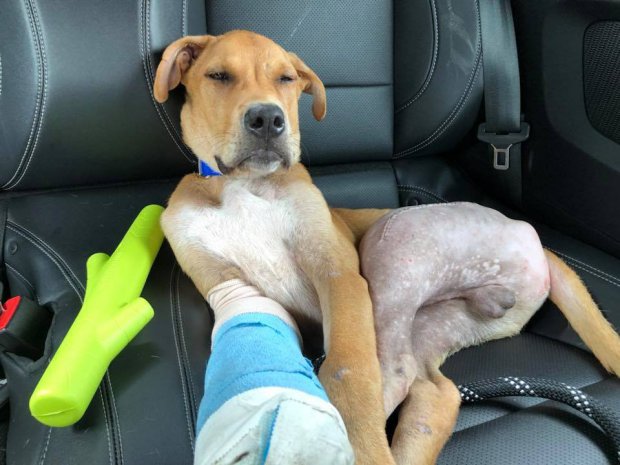 When they got into town, they ran into a businesswoman from the other side of the US. Andrea Shaw was visiting from Maine but the pup took one look at her and ‘ran right to her as though he knew she was his next step.’ She told Metro.co.uk: ‘We just happened to be standing in front of the bike shop where an organised ride leaves from on Tuesday nights – so Jarrett pulled up with Bo on his back. ‘I had just gone to dinner with a work friend and we took a walk around Columbus before calling it a night. ‘I love all dogs – but at this point I didn’t know he was a stray. When Jarrett and Chris told me the story I knew I wasn’t leaving him to suffer’ Andrea immediately called her husband to run it past him but it was a no-brainer for her – she wanted to take the dog home. ‘I told him I just found a dog with a broken leg and he was bleeding and I couldn’t just leave him there. ‘I was taking him to the ER vet and would figure out the next steps later. He said “OK. Is your hotel pet friendly?”.’

Read what happens next with lots more photos here.