How sniffer dogs are helping protect honeybees from decimation

Honeybees are a vital workforce, but they are increasingly under threat. In the US, well-trained canine defenders are helping track down a bacteria that could devastate bee population.

Cybil Preston stretches her bare hands into a noisy beehive and pulls out a frame of honeycomb, its waxy cells filled with nectar, its surface alive with bees.

“This girl right here was just born,” she says, pointing out a bee with a silvery thorax. “See how her hair is still matted down like a teddy bear?”

Preston, the chief apiary inspector for the Maryland Department of Agriculture, is on a routine survey of registered colonies northeast of Baltimore. “I’m always looking for signs and signals,” she says, as she examines a worker bee with a misshapen wing. “It’s like CSI.” 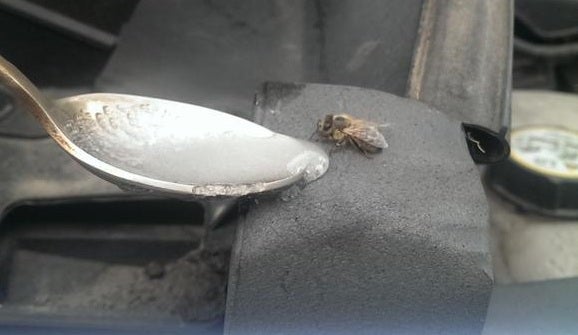 Honeybees are a vital, invisible workforce in the food industry, pollinating about a third of US crops, and Preston leads a team that tracks their wellbeing. She pays close attention to Maryland’s commercial colonies, which beekeepers lease out to work blooms across the country – almonds in California, blueberries in Maine and New Jersey, citrus in Florida.

Preston, 45, certifies that each beehive crossing the state line is free of American foulbrood, bacteria that are harmless to humans but can spread quickly from hive to hive, decimating bee populations.

“Everything else that can go wrong with the hives is fixable,” she says, “but not that.”

Four years ago, Preston trained a dog to help her find foulbrood, figuring it out as she went along. She recently received a grant through the federal farm bill to expand her canine detection programme, which could serve as a model for other states.

Unlike human inspectors, dogs don’t need the hives opened up to check them for foulbrood. They can trot by, sniffing at the comb, and tell if the bacteria has killed off any larvae. Four people working full-time cover less than half of what her dog can,

Her golden Labrador, Mack, inspected about 1,700 honeybee colonies last fall and winter. In the cold, when the bees were clustered and the comb was hard to inspect visually, Mack used his nose. This allowed Preston to continue certifying hives for shipment to warmer climates.

“If I didn’t have dogs, these bees just wouldn’t be able to move,” she says.

On a recent Friday morning, on the green slopes behind her home in Jarrettsville, Preston tosses a toy around for Tukka, a young springer spaniel she has just adopted.

At first glance, it doesn’t look like a workday. But that toy has been sealed in a plastic bag with foulbrood, and Preston is in the early stages of training Tukka on the scent. With any luck, he will join her team before the end of the year.

“You want Foulbrood Bunny?” she asks, throwing the fuzzy grey toy across the field.

Tukka catches the toy in a frenzy, salivating at the smell of it, chewing it with delirious pleasure. “This is what I want to see,” Preston says.

Soon, she will move on to putting foulbrood inside a small rubber toy and throwing it farther, or in an unexpected direction, to see if Tukka can sniff it out. Then she will hide the scent in the training installation she built exactly for this purpose – tubes mounted close together at various heights on an industrial plastic pallet.

If the exercises are successful, Tukka will learn to find even small traces of the scent, and communicate that to Preston by pointing with his nose, then sitting down.

She trained Mack the same way, bonding with the dog through games and repetition, building up his confidence and trust, all the while teaching him the basics of his new job. That training took nine months.

“I had to learn to trust him,” Preston says.

Mack was a year and a half old when she found him living in a garage. Preston adopted him on the spot and took him to Mark Flynn, the K-9 unit commander at the state’s Department of Public Safety and Correctional Services, to get his opinio

Flynn trains dogs to associate scents with play. “We’re looking for those dogs that’ll jump into water to get the ball, the ones completely obsessed with their toys,” he says. “Because when a dog is searching, he believes in his heart he’s trying to find his toy.”

This applies whether the dog is looking for contraband cellphones and drugs in prison cells, or foulbrood in beehives.

Many of the dogs Flynn trains are adopted through rescue organisations, exhibiting the kind of high-energy behaviour and hunting instincts that make them unlikely to be adopted as family pets but ideal for scent work.

Mack’s drive is low. “But there is this phenomenon where you can actually build up drive in a dog,” Flynn says. And through play, reward and repetition, that’s just what Preston is doing.

She goes home in the middle of her busy workdays to train Tukka, a rescue dog she adopted through Flynn, because Tukka requires sessions at least four times a day. It’s a lot of time, but Preston reminds herself that once Tukka is up to speed, he will help her team cover more ground, work faster and more meticulously, and protect more honeybees.

The hive of a single healthy colony may hold around 30,000 bees in the late fall, and closer to 20,000 by the end of the winter. This time of year, as the bees gear back up and forage, each hive could be buzzing with up to 60,000 bees. The tractor-trailers that carry hives across the country to pollinate crops are typically moving about seven million bees at a time. They are all vulnerable.

Marla Spivak, a professor in the entomology department at the University of Minnesota, has been working for more than a decade to understand why honeybee populations are dwindling.

She says it may be a result of environmental stress, weakened genetics, a lack of good nutrition from pollen (which affects bee immune systems) and a host of other reasons that interact with one another. Foulbrood, which has been reported in the US since at least the 1930s, is particularly devastating now because bee health is so fragile.

If someone with even a single hive loses the colony to foulbrood and lets the empty hive sit around, other bees in the area will quickly move in, loot its resources and inadvertently carry the dangerous, spore-laden honey back to feed their larvae. As Preston puts it: “It’s in every bee’s nature to rob.”

This makes even one hive a risk. “If there are foulbrood spores in the comb, they stay in the comb for probably a hundred years,” Spivak says. “The only solution is to burn the comb and equipment, and that’s harsh.”

Outbreaks are preventable, but beekeepers have to know what they’re looking for.

“Dogs are great because they can sniff it out at such low levels,” Spivak says. But they are also rare in the business, in part because of the investment in training them. She has seen a dog working among hives only once, and that was almost 30 years ago.

Maryland has run a canine detection programme since the 1980s. But when Preston took over the department, both the dog handler and his dog retired at the same time. It took almost a year, but she built the programme back up from scratch.

“All beekeepers are having trouble keeping their bees alive,” she says. “If they’re putting the effort in, I want to put the effort in.”

The hives are quiet when the dogs work, so they’re not in danger of stings as they pad around without the veils that protect beekeepers. Mack has been stung only once or twice. And on long summer days, when the hives are busy with bees flying in and out to forage, Mack is cautious. He keeps his distance.

Just as she is throwing the scent-soaked toy for Tukka, Mack leaps up from his sunny spot in the grass and charges at the other dog full speed, only to delicately lick the Department of Agriculture’s newest employee right on his snout.

“You’re working with another living creature,” Preston says. “There’s no protocol here. We’re all just flying by the seat of our pants.