Heroic woman jumps in frozen lake to save drowning dog

A woman has risked her life by jumping into a frozen lake in order to save an elderly man’s drowning dog. Witnesses said the hero, who has not been named, had to break up ‘chunks of ice’ in order to swim 20-metres to the bulldog-type breed in East Park, Hull. After climbing out she was then comforted by strangers, who wrapped her up in their coats. 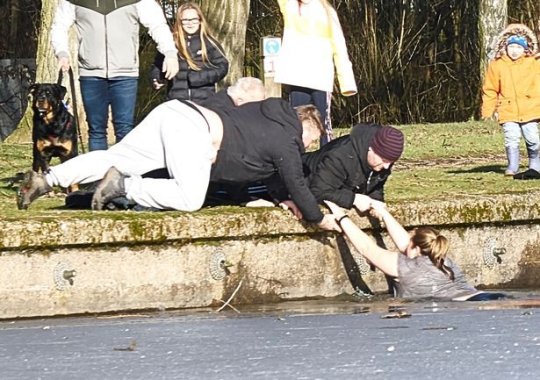 the dog apparently shook itself dry of the water and was seemingly unharmed in the incident. An bystander told Hull Live: ‘I think an old gentlemen lost his dog and it had jumped in the lake and couldn’t get back out.

‘The dog became really distressed, the water must have been very cold and freezing. ‘A woman then came along, broke the ice in front of her and jumped in. She swam 20 metres out into the middle of the lake and then brought the dog back with her. ‘I heard all the commotion, looked over and just got in the water and broke the ice to get to the dog.’ 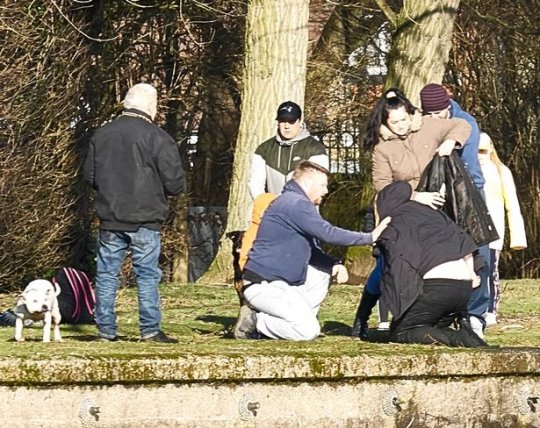 In photos of the incident the woman can be seen wading through the water to reach the animal. Bystanders then helped to pull out her out of the lake once the dog was safely back on land.

The witness said that the woman’s actions were ‘very brave’ and at one point they had feared she was also going to ‘go under’. ‘She struggled at one point, but got to the dog and back in the end,’ they said. ‘She did really well, it was amazing.’