A hero dog fought off a violent robber who attacked an 86-year-old great-grandmother in her own back garden.

Joyce Ackerley was hit over the head with a large stick and knocked to the ground by a man who tried to rip her earrings out.

But as he grabbed Joyce her faithful pet Axel – an Alsatian-Akita cross – jumped to her defence, throwing himself at the man and pinning him to the floor.

Axel bit the yob’s arm when he tried to wriggle free and then the heroic mutt ran after him until he was sure his owner was safe, reports the Manchester Evening News. 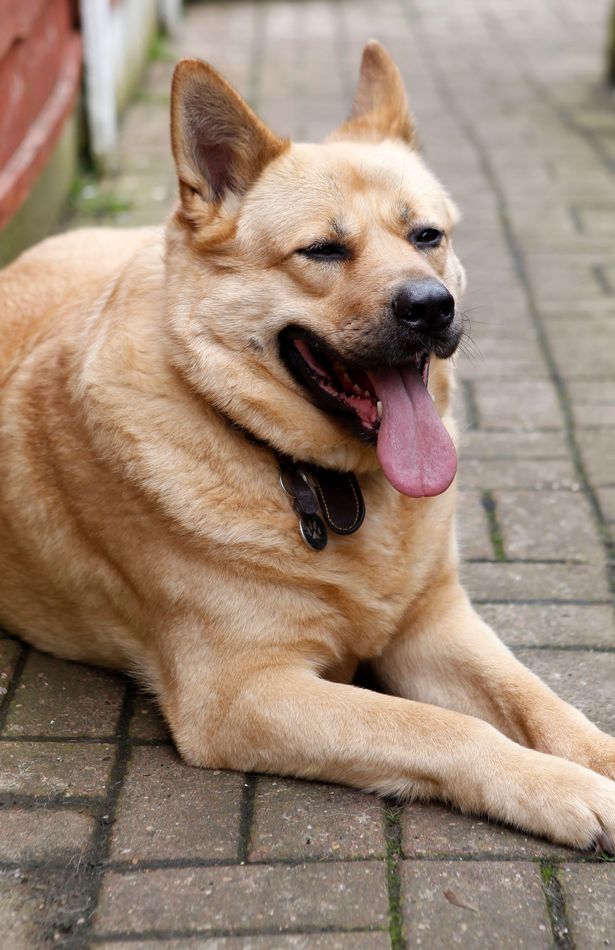 Retired dress maker Joyce, who lives in Salford, Little Hulton, said: “I was opening the gate and the next minute it flew open and he hit me on the head with something like a broom.

“Where I go, Axel goes. When the man grabbed me I must have screamed as he rushed straight up the garden and jumped at the man and knocked him to the floor.

She banged her head on the floor when she was pushed, but did not hand anything over to the man.

Police have appealed for witnesses to the incident, which happened on March 13 at around 4pm.

The man was white, 5ft 5in, aged around 25, with dark stubble and a dragon or snake tail tattoo stretching from his left forearm to his finger. He was wearing a dark hooded top and trousers.

When Axel came back from chasing the man he had his blood around his mouth, but he went for a drink so the police couldn’t use it for DNA.

Joyce, who has been a widow for 13 years, added: “It happened so fast and I couldn’t remember it for a couple of days afterwards. I am angry that such a thing happened.

“I’ve never seen Axel react like that before, normally he is as gentle as a lamb.”

Det Con Steven Hughes said: “This lady was violently assaulted. This incident could have been much worse if her dog hadn’t have stepped in and scared the offender away.”

“Axel is very protective, even now, when I go to the bottom of the garden he comes with me and watches the gate all the time. I am very proud of him and grateful – he got spoiled afterwards.”

The thug demanded Joyce – who has four sons, one daughter, eight grandchildren and seven great-grandchildren – ‘hand over her jewels’.