‘Hero’ dog chased away burglars threatening his owners in their home

A very brave dog has been praised for chasing away burglars who had broken into a house and were threatening his owners. Victory, a 12-year-old cross-breed, bounded towards the gang as they attempted to kick a door down at the property in Ashford, Surrey.

Captured by CCTV cameras set up by the family, the burglars can all be seen turning to look at the black dog sprinting towards them down the hallway, before immediately fleeing the scene. One of the men appears to strike Victory with a blunt object but fortunately he was uninjured in the incident. They said: ‘It could have resulted in a much worse fate if it wasn’t for Victory’s response. Victory is our hero and we will never forget that.’

No arrests have been made following the incident, but police say the clear CCTV footage could help bring the gang to justice. One member of the family described the incident as ‘scary’, adding: ‘My two young sons were in the house and one was awake with the door open when it was taking place.’ 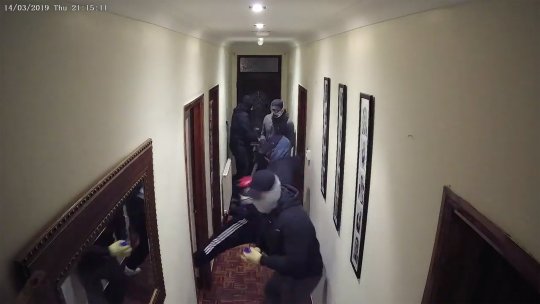 They continued: ‘[Victory] is 12 years old and we have had him since he was a pup, but we don’t actually know what breed he is. ‘All we know is he’s a cross breed, some people say he looks like a Labrador, but we will never know for sure. He’s such a brave boy!’ Surrey Police are calling on anyone who may have information about the aggravated burglary to get in touch.

A spokesman for Surrey Police said: ‘Four suspects entered the property in Chalmers Road, armed with weapons and cleaning spray. ‘The suspects had their faces and hands covered as they made their way through the property, while the home owners were present. ‘One of the suspects threatened the residents before a dog came down the hallway and disturbed them. One of the residents managed to chase the suspects off before calling the police. ‘The dog did not suffer any apparent injuries.’