A delivery worker had half a finger ripped off by a dog while she posted a card through a letter box – and she said police refused to retrieve the severed digit.

Hermes worker Nicola Cringle, of Bury, Greater Manchester, said she is in constant agony and unable to even dress herself after the dog savaged her hand three weeks ago.

The 32-year-old was posting a delivery note through the letter box of a property in Swinton, explaining a parcel had been left next door. 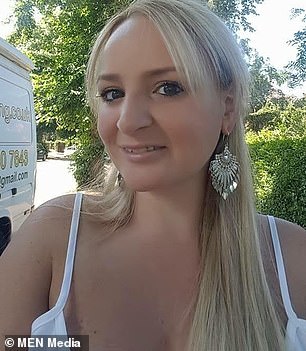 As she put her hand through the letter box a dog on the other side of the door clamped its jaw around the tip of her finger.

It pulled so hard Nicola’s forehead smacked onto the front door as she screamed for the dog to let go.

When she pulled back her hand to Nicola’s horror the dog had bitten off half her finger and tendon.

Police were called to the scene, but Nicola was left dismayed they would not drive her to the hospital or break down the door

Greater Manchester Police have said they did not have powers under the Dangerous Dogs Act to force entry without a court order and they did not believe it was urgent when surgeons said the possibility of reattaching the finger would be unlikely.

A neighbour came round to try and help Nicola before she eventually managed to pull her hand free.

As police were called to the scene she waited in a neighbour’s house for an ambulance.

.to help retrieve her finger. 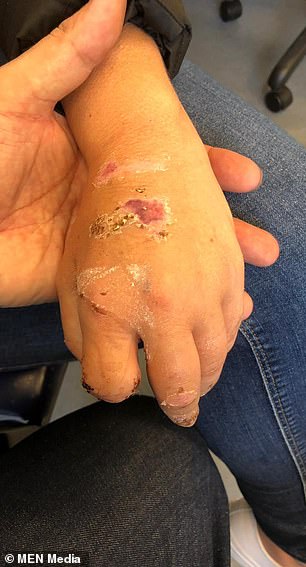 But there was a delay, GMP said they were unable to take her and after an hour a friend drove her to the hospital.

Doctors told Nicola they would not be able to save her finger and she would need to have operations to remove the bone instead.

Later on in the evening neighbours retrieved the finger and tendon, but described it as ‘shrivelled up’.

The dog involved is understood to have been a pitbull and is believed to have gone missing following the attack.

Nicola has undergone several operations and is now recovering at home, but has been unable to return to work.

She has since complained to GMP for their handling of the incident and believes if they forced entry into the property her severed finger could have been saved.

The mother-of-three said: ‘I was trying to pull my hand back, but it was not letting go. I was screaming and kicking the door….