A German Shepherd is looking for a loving new home after suffering months of neglect by her previous owner.  Sheena, six, was discovered almost completely bald when she was rescued by RSPCA inspectors in September last year. The dog, who should have a thick black and tan coat, had no hair left on her body and just a thin layer of fur around her face. 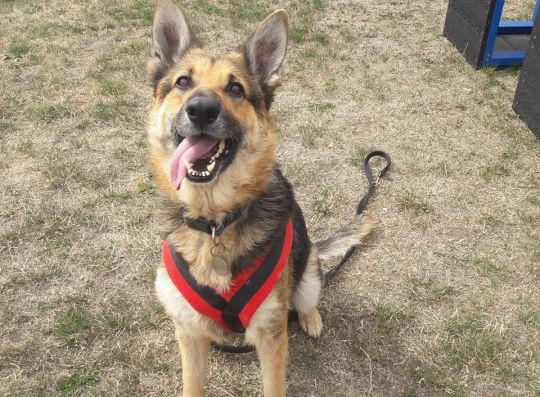 RSPCA Inspector Sara Jordan, who responded to complaints from the public about Sheena’s condition, said: ‘A member of the public grew concerned about Sheena and a second dog – Staffordshire bull terrier Belinda – at a property in Sheffield and contacted us.

‘Both dogs were suffering from extensive fur loss and, when I took them to the vets, we discovered they both had severe flea infestations. ‘Police seized the dogs and placed them into our care while we investigated.’ Sheena and Belinda, eight, were taken in by the RSPCA’s Sheffield Animal Centre.