A man was shocked when a neighbour rang to tell him that his dog was standing on the roof of his house. Scott Gretton had just left for work when he got a call to say his Tamaskan wolf dog Gary had escaped onto the three-foot high tiled roof at the front of his home. Scott, 31, said he felt ‘sheer blind panic’ after realising the 15-month-old pet had climbed out of his bedroom window. 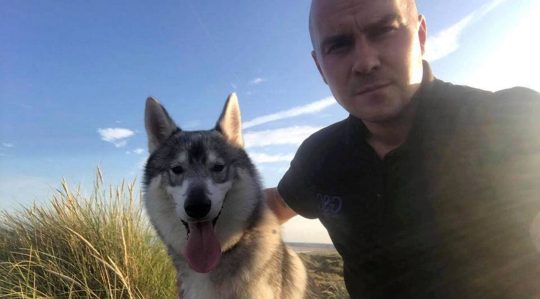 Scott, from Hartlepool, said by the time he rushed home to rescue Gary, he had gone back inside the house and was lying on his bed playing with a ball.

Scott, who is the managing director of GSC Construction, said: ‘I had left for work and I was over the other side of town on my way to one of the sites when a neighbour rang and said: “Where are you?” ‘When I said I was at work and asked her what the matter was she told me: “Your dog is on the roof”. ‘I just said, “You’re kidding, what do you mean?” and she explained Gary was just walking about on my roof. ‘There are a couple of cats on my street and he normally sits in the window. All I could think was if there are any cats kicking about he will jump off the roof.

‘I told her to ask her son, Ben Rowbotham, to do what he could, jump over the fence and let himself in. ‘I knew the bedroom window was slightly open so I told him to just try and coax Gary back in that way. ‘I was told that as Ben tried to jump the fence Gary was just licking his face, hanging off the roof. ‘By the time Ben got into the house Gary was on the bed playing with a ball. ‘I’m beside myself in sheer blind panic flying through the town to get back home and he is sitting on the bed playing with a ball.’ Ha added: ‘Some guard dog he is!’