Cody in the local press.

‘I suffer from depression and addiction and Cody got me through that. I don’t know what I will do without him’

A former drug addict is camping out in woodland in a desperate bid to find the dog that helped him with his recovery.

James Firsht, 40, hasn’t seen Cody, his Staffordshire Bull Terrier cross, for two weeks since he ran off while being taken for a walk.

He fears he may have been snatched and is now offering a £1,000 reward to anyone who can help. And he says he has been unable to sleep properly and refuses to go home until he has been found.

“I suffer from depression and addiction and Cody was the thing that got me through that. I don’t know what I will do without him,” he said. “I am desperate to find him.”

Cody was last seen been on Hadley Wood Common, near Barnet, north London, two weeks ago. He was with someone Mr Firsht has used as a dog walker for the past three years. 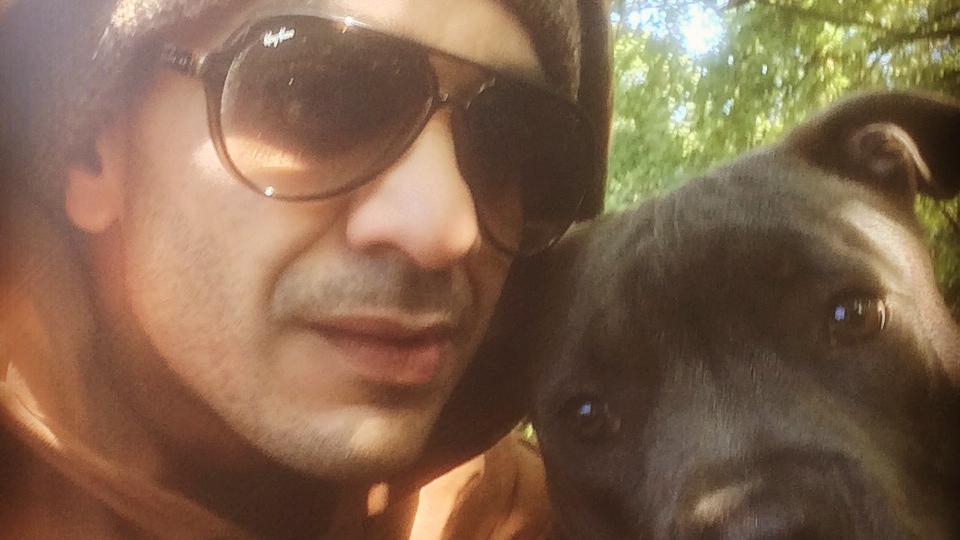 “She took him off for a walk and he ran off after a squirrel and didn’t come back,” he said.

“She spent hours looking for him. She was scared to tell me. It is totally unlike him. He doesn’t normally run away.”

Mr Firsht has asked his employer for time off from his job as a gas engineer to continue the search. He and his girlfriend, Lorna Roach, have spent days putting up missing posters in the area.

He says there have been “sightings” of him in East Barnet but nothing has been confirmed. Other unconfirmed reports have placed Cody in Cockfosters and Victoria Park.

He added: “He was given to me when I was going through a really difficult time. I wasn’t looking after myself, I had no job, and I was really low, but then he gave me something to live for.

“I learnt how to take care of him and I managed to get a job and started paying my bills again. He is really important to me.

“I worry that he ran off and has been picked up by someone else. He is microchipped so if anyone takes him to the vet all the right details are registered.

“I offered the reward because it is all I have. I would give more if I could but that is all of my savings.

“I’m lost without him and I really have no idea where he could be. I just want him home I would give everything I have for that.”