DogLost is preparing itself for a busy period as the fireworks season is in full swing with Diwali and Guy Fawkes.

“What makes the situation worse is that it used to be just one night of fireworks, on Bonfire Night itself. Now, people are letting off rockets and explosions indiscriminately for weeks before and after 5 November.

“This means pet owners have to be smart and follow advice to prevent them from losing their dogs this year. Our Social Media Team are busy getting the message out far and wide.”

“This is simply not the case anymore. Dogs, especially those running scared, can cover a lot of ground and could travel into another county. Sadly, we also have people who may well pick up a stray dog and keep it for themselves or move it to another a part of the country. 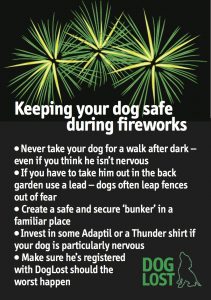