A disabled puppy who took his first steps without a wheelchair just days ago, has been given a hero’s welcome at Crufts. Hungarian Vizsla Gilbert has struggled to walk ever since he was accidentally trodden on days after being born. The dog’s spine was left permanently injured, with his right hip crushed.

Vets believed the only option was to put the pup down at the age of one, after he struggled to get over the life-changing injuries.

But Jane, 57, and Kevin Bircumshaw, 61, took in the stricken pet and nursed him back to health, and later burst into tears of joy after filming him finally walking without the aid of his specially fitted wheelchair. Thanks to the donations of kind-hearted Vizsla lovers around the world, Gilbert has undergone £23,000 worth of treatment to get him back on his paws. 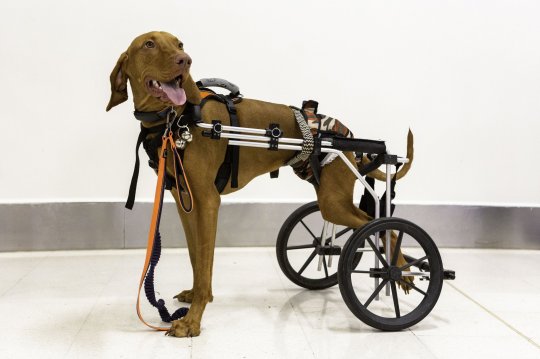 Bournemouth-based painter and decorator Kevin was overwhelmed when he saw their beloved pet walk unaided for the first time. His wife, Jane burst into tears watching the ‘special moment’. Kevin said: ‘We normally video everything he does for his Facebook page but the camera was shaking so much, it was just such an emotional moment for us, there were plenty of tears.

‘He’s always going to need the wheelchair for walking around outside, he’s never going to do that on his own but we’re confident he’ll be able to walk round the house and live a normal life within home.’ Although Gilbert enjoys whizzing around in his chair, Kevin said he loves seeing his pup’s tail wagging with pride when he walks without assistance. 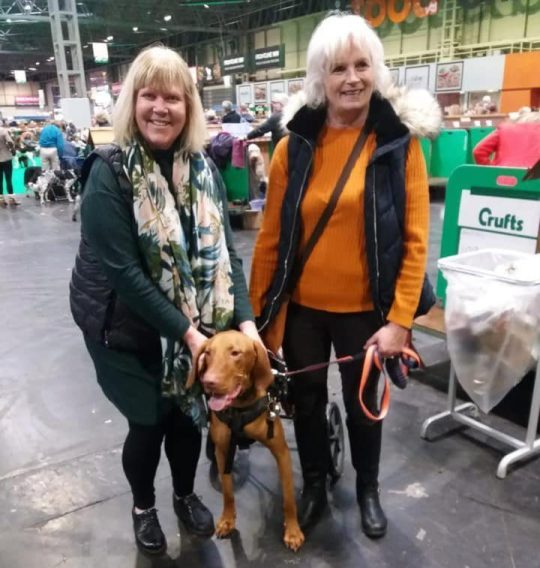 ‘It makes all the difficult days worth it,’ he added. Crufts is known for its famous Best in Show prize, which awards medals for perfection in the pursuit of finding the ultimate Pedigree. Although Gilbert won’t be able to compete for that prize, few other preened canines can match his resilient spirit.