A blind man says easyJet left him ‘stranded’ after he was kicked off a plane when he refused to attach an ‘unsafe’ harness to his guide dog.
David Ferguson, from Bangor in Northern Ireland, was flying back to Belfast with his dog Jamie following a trip to southern Portugal.

The pair were scheduled to take the 2.10pm easyJet flight from Faro to Belfast City Airport on their return journey home when they encountered problems.
After boarding the aircraft, David says a flight attendant demanded he attach a seatbelt extender to his dog Jamie – something which David deemed unsafe as it was made for humans and not for dogs.
The retired 63-year-old refused to use the extender because he feared for Jamie’s safety in the event of a crash. 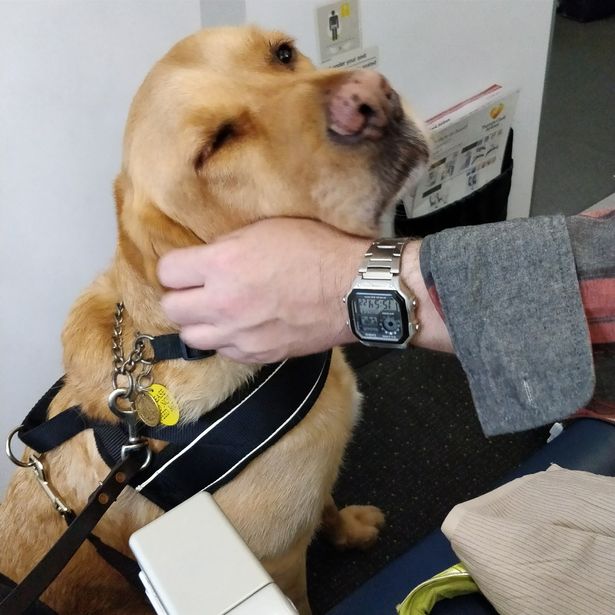 David and Jamie have previously boarded flights to Gatwick and Spain without issue using a cushioned harness he provides for plane journeys.

The safety harness is approved for use on airplanes by the Civil Aviation Authority, David says.
David suffers from Usher syndrome, a disorder that causes loss of both hearing and vision, and says he struggled to understand the company’s staff.
The flight was held up for 30 minutes while he negotiated with crew – but was eventually booted off the plane.
At one stage, a pilot for the airline intervened in the dispute but found nothing wrong with seat belt extender provided.