Lets start with one of last years great Christmas reunions.

What would your best ever Christmas present be ?” said DogLost’s Jayne Hayes as she called the owner of a Pug stolen more than two years ago.

Owner Maurice Loscombe couldn’t quite believe his ears when he heard that his beloved Pug, Puggy, had been scanned at a vets 45 miles away. “Oh, my God” he screamed “I can’t believe it, I’m going to cry.” 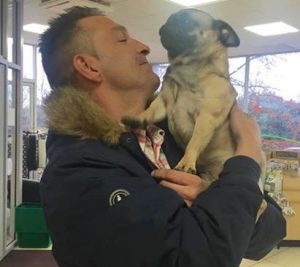 The first long term reunited of the Christmas season was the result of Wild Boar Vets in Worksop scanning Puggy when he came in with an unsuspecting owner. Using the DogLost Halo scanner Puggy’s chip flagged up the need to contact DogLost.

Said Sharon Clayton: “This is the first time this has happened to us and it demonstrates the importance of scanning. We are so happy for the owner, and Puggy was so pleased to see him.”

Puggy was originally stolen in a house burglary in Beeston, Leeds in March 2014 and sold on twice. Said Jayne Hayes: There are two victims here, Maurice and the unsuspecting family who bought Puggy seven weeks ago.”