A former reality star from Made in Chelsea has hit out at Chanel after seeing two dogs being kept in cages inside one of the company’s London stores. Tabitha Willett, 27, shared pictures of the animals on Instagram and told her followers the snaps were taken at the Sloane Street shop at around 11pm on Friday night. In the images the dogs can be seen lying in enclosures that are hardly bigger than themselves, with no food or water visible nearby. 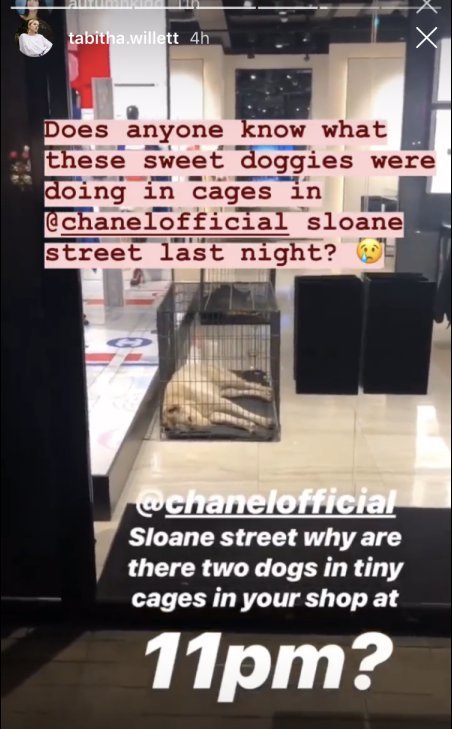 he TV personality, who is currently expecting her first child, then continued: ‘I phoned Chanel up who said the dogs were there for security purposes which I don’t understand as they are locked in crates and the crates are far too small for their size.

‘Also no water is visible at all and one of the dogs wagged friendly [sic] when my friend who videoed this walked up to the window so not very scary?’ She added: ‘I was assured that the animals were only kept in crates for a few hours at a time (still too long I think under these fluorescent lights too) and there was a human man there as well.’ Tabitha told Femail that a woman from Chanel said the store had recently suffered a break-in, resulting in the arrival of the dogs. 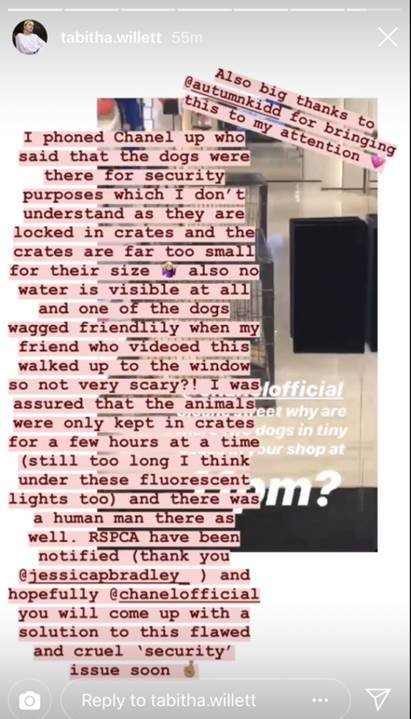 The RSPCA said that the picture ‘raised some questions’ and emphasised that the cages shown were only meant to be used to transport pets.

As a minimum, crates need to be big enough for the dog to be able to sit and stand up at full height, turn around, stretch out and lie down in a natural position,’ a spokesperson said. ‘Adding soft, comfortable bedding and safe chew toys help dogs feel comfy, safe and secure. ‘Dogs need access to water at all times so a bowl of water should be provided when a dog is inside the crate.’

A spokesperson for Chanel told Metro.co.uk said: ‘Due to two recent serious incidents in the Sloane Street boutique, Chanel has decided to reinforce the security measures by seeking the services of a dog handler. ‘We understand the concern of those who care about animal welfare and we share it. ‘We want to assure them that these two dogs, which are specially trained for this purpose, are released from their crates on a regular-basis to stretch and exercise and there is a regular supply of food and water throughout the duration of their time in the boutique.’