A woman was bitten to the bone by a dog which attacked her and locked its jaws around her pet’s throat in a Swansea park in broad daylight.

WARNING: There are graphic images in this article.

The attack has left Nicola Round “terrified” about going out again.

The 48-year-old was walking her dog, Jess, at Highmead Park, Newton , on February 10 when the incident happened.

“Jess was on lead and we were walking past our local children’s park in Newton,” she said.

“I was walking along the pavement and I could see a man throwing a ball playing with his dog which was a pit bull/staff cross which was off the lead.

“I approached a bin to put a poo bag inside when the dog ran towards us and pounced on Jess’s back.

“I instantly let her lead go hoping she would run but sadly it was too late as the dog had locked his teeth onto the side off her neck. I’ve never heard a noise like it before. I was screaming for help,” she said. 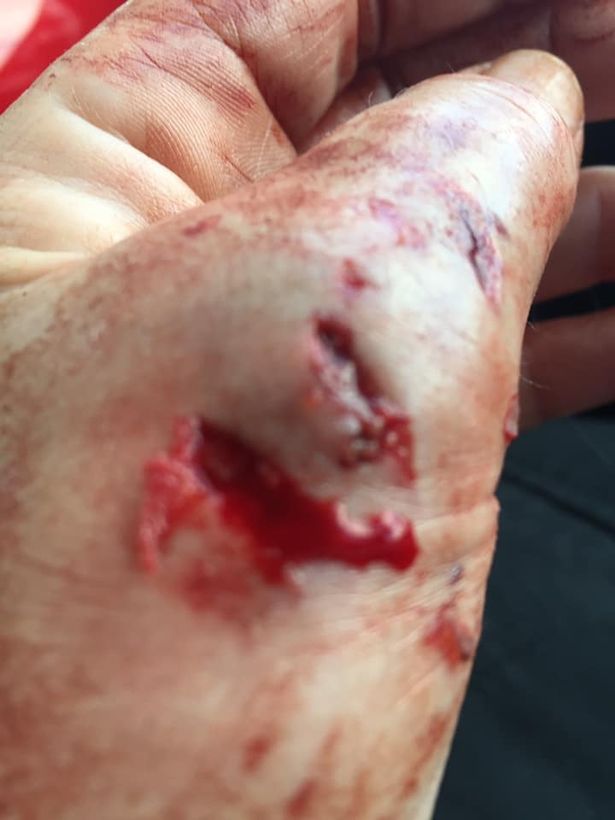 The owner of the dog then walked towards the pair of them.

She added: “He walked over and pulled something out of his pocket, he then attempted to pull his dog off Jess.

“It seemed like an eternity before the owner managed to unlock the dog’s jaws with a tool he got out of his pocket which highly resembled a “break stick”.

“At that point I was kneeling on the grass holding Jess still to try and minimise the damage already done.

“As the dog released her I got up and realised it had her lead in its mouth dragging it, this was the point that it then bit me as I pulled it over her head.

She said she thought her dog was going to be killed.

“I fell to the floor in shock, so I also have cuts and bruises on my knees to add to my injuries. I quickly got back up and ran home with Jess.

Ms Round then went to Morriston Hospital where she was treated for her injuries.

“My daughter could hear me screaming when I got to the house and my neighbour also came over. There was blood everywhere from my hand.

“I then went to hospital, the wound was so bad that you could see the bone in the thumb. The dog not only severed my skin in several places but actually punctured the bone in my thumb. I am now on antibiotics and painkillers.

“Jess has been checked out at the vets and has puncture wounds on her neck and bald patches which are raw where she had her fur torn out in the attack, she’s on antibiotics and metacam and we have to monitor her closely.

“My hand doesn’t seem to be getting better, I can’t do day to day things at the moment, my daughters are doing everything. I can’t drive as I am unable to move the gear stick.”The 48-year-old housewife said she had never been so scared in her life and the incident had a big impact on the community.