True, a two-year-old mixed breed dog, had a tough start to life. He was originally owned by an addict, who, while high, cut off the dog’s two front legs after spotting True digging a hole in the garden. True managed to drag himself closer to the neighbour’s house. The neighbours rushed him to a shelter in Ukraine so he could get urgent medical care. The shelter kept True for a few months so he could recover, but worried that he wouldn’t survive the winter due to his new disability. Once he was healed physically, the shelter reached out to one of their rescue partners in Canada, Cause 4 Paws, to spread True’s story on social media and raise funds for his medical bills. 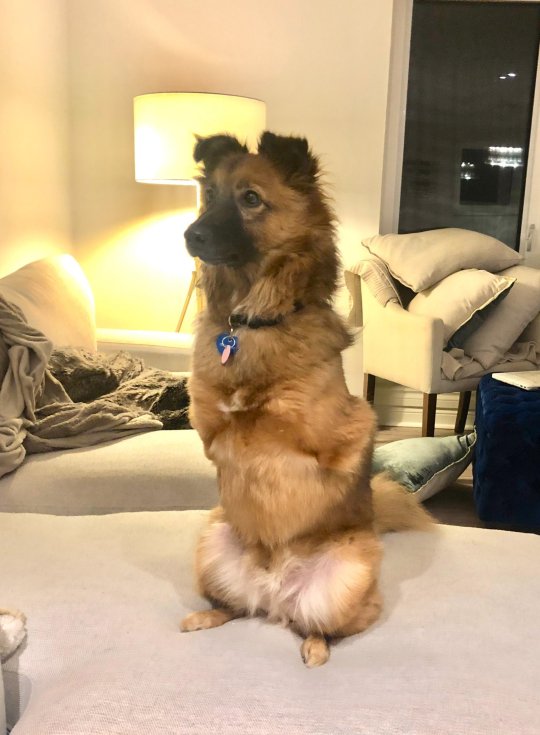 That’s how estate agent Erin Blaak, 31, discovered True’s story. She wanted to adopt him instantly, despite him being miles away in Ukraine. On December 4, 2018, True was flown to Toronto to meet his new family; Erin, chef Romain Avril, their Pomeranian called Bandito, and their Labrador-Dane mixed breed Brady. ‘I wasn’t even looking for a dog as we already have two, but I follow rescues on Facebook and his picture popped up with his story,’ said Erin. ‘True is from Ukraine and his owner was high on drugs. True was digging a hole outdoors, and his owner hacked both of his front legs off. ‘The owner later died of an overdose. One of the neighbours found True as he had dragged himself close to their house. ‘It absolutely broke my heart. I spoke to my boyfriend and I called in immediately and offered to foster him. The rescue that brought him over is called Cause 4 Paws and they’ve been doing this for several years and they have rescued over 1,000 dogs.