This is what happens when a sensible dog owner walks his dog at night because of the hot weather. Its absolutely disgusting…please share the CCTV and see if we can find them…So any one with friends in Cowes Isle of Wight or indeed anyone who knows of anyone on holiday there…share it to them as it may be their sons and daughters doing this…

A dog walker has revealed his injuries after he was beaten up for trying to protect his dog. He spotted a group of young people smashing glass and told them to stop what they were doing and pick up the glass. He feared that his dog and other animals walking past may get cut by the shards of glass. Dog walker attacked with bottle in the street

But they then turned on him, with one of the gang knocking him to the floor and beating him up in the middle of the street at 11.30pm last Thursday. One of his shoes came off in the scuffle and another member of the group could be seen walking off with it. 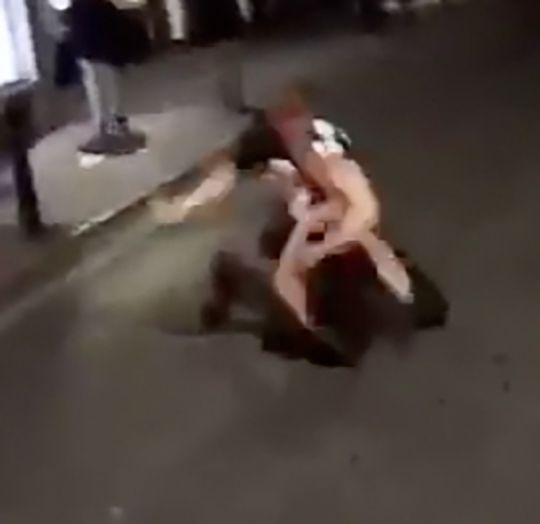 Footage captured the moment of the attack in Bath Road, Cowes, on the Isle of Wight, which is now under police investigation. The victim said: ‘I was worried that it may cause a fire or my dog or other may get cuts from it. ‘I asked them very nicely to pick it up and explained my reasoning. They then turned around and that was when I was smashed in the face.

‘I fell to the ground I felt my legs go. It was whilst I was on the floor than one of them kicked me in the side of my face – all for asking them to pick up the bottles that they had smashed.’ The group are then said to have fled the scene, however the incident was caught on CCTV. Hampshire Constabulary said they received a report that a man, believed to be in his 40s, had been assaulted on Bath Road in the town. Anyone with information is asked to call police and quote 44180283639, or call Crimestoppers anonymously on 0800 555 111