Dog shot 36 times and had legs chopped off

A rescue dog who was tormented by her previous owner has formed a close bond with another pet who also has his back legs missing. Border collie cross Flo had her two hind legs chopped off with a machete and was shot 36 times with pellets when she lived in Romania. She was eventually rescued by a sanctuary, before Shena and Ian Fairless stepped in to give her a forever home four years ago. They moved her to their Pudz Animal Sanctuary in South Killingholme, North Lincolnshire, and she has been thriving ever since. Flo has made friends with Jerry, five, who had his back legs amputated when he was a year old after being hit by a car. He has been at the sanctuary since he was six months old.

Mrs Fairless, 50, said: ‘When they first met they’d just used to play all the time. ‘I think animals can sense disability and it’s like they have an affinity with each other. ‘When we first adopted Flo, Jerry used to walk by her pushchair with his wheels on. ‘When Flo would run around he would be by her side. He definitely helped her out. ‘They sleep in the same room and I’ll often see them snuggling up with each other. ‘They love play fighting and playing with balls together.’ 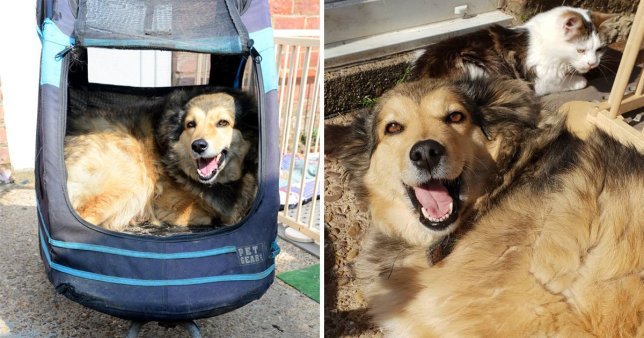 Jerry was born paralysed and would drag his back legs around before Mr and Mrs Fairless managed to raise £5,000 to have them amputated and get him a set of wheels. Flo is able to hop on two legs for short distances but has a pet buggy she can rest in if she gets tired. She can’t be fitted with prosthetics because there was not enough skin covering the bone in her back legs. Mrs Fairless added: ‘When we learned the true extent of Flo’s injuries we couldn’t actually believe it. ‘We took her to the vets in September 2016 and that’s when we were told the injury was consistent with a machete or something similar because the bones were jagged. ‘But not only that she was also riddled with gun pellets. ‘I just gasped and burst into tears when I saw the MRI scan.’

She added the pellets were still in her body because it was too dangerous to remove them. Mr and Mrs Fairless set up the Pudz Animal Sanctuary in 2013 and now have around 136 animals including cats, ducks, chickens, chinchillas, rabbits, guinea pigs and a blind dog Maltese Griffin cross Zola. Mrs Fairless helps to fund the home by running Vegan Festivals. You can donate to the sanctuary here.