Dog riddled with cancer found collapsed and tied up in park

A dog riddled with cancer collapsed after someone left him tied up to some railings at a park in London. Passers-by at Clissold Park, in Stoke Newington, initially thought the dog had been left temporarily by its owner when they first spotted him at around 8pm on Wednesday. However, when they noticed he was still there an hour later they grew concerned and contacted the RSPCA.

Animal-welfare officers arrived to find the dog, a brindle and white Staffordshire bull terrier, with a bloated belly and overgrown nails.

The underweight dog was also depressed and lethargic. Inspector Jemima Cooper said: ‘I find it unbelievably sad that an extremely sick dog who was in desperate need of veterinary attention was left alone to fend for himself.’ He was rushed to RSPCA’s Harmsworth Animal Hospital where vets discovered that he was suffering a severe terminal cancer. Cooper continued: ‘Sadly, vets have found he is riddled with cancer, and though they are doing all they can to make him comfortable right now, he is in a very bad way. ‘We’re still trying to find out more at this stage as to who dumped him and why.’ 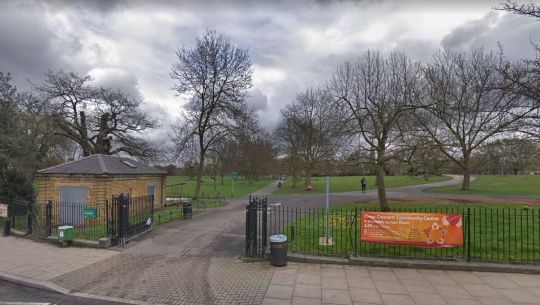 The charity has appealed for information and is trying to find out why someone ‘dumped’ him at a time he ‘needed them the most’. Cooper added: ‘He had a microchip but there do not appear to be any details registered, so we’re asking the public if they happened to see anything on Wednesday that might help our investigations, or if they recognise the dog. ‘The people who found him were really kind and kept him with them safely at a nearby pub until we arrived. ‘He’s a very friendly, affectionate older boy which makes it so much harder to understand why somebody thought the right course of action was to abandon him at a park, at a time when he needed them the most, it’s heartbreaking.’ Anyone with information can contact the RSPCA in complete confidence on 0300 123 8018.