Joanne’s Labradoodle Hugo was snatched on a walk and now she is calling for vets to scan the microchip of every new animal they see to tackle pet theft.

She’s launched a campaign after her four-year-old dog went missing while walking on a canal path – thankfully he was found the same day.

Joanne, 42, from Warrington, Cheshire, was chatting on the phone when a man walked past her and seconds later she turned to check on Hugo and he’d gone.

She said: “I was talking to my sister and something made me think, ‘He looks a bit dodgy.’ I cut the call short and turned around to find Hugo had vanished.

“He never leaves my side and I could see for quite a long way ahead and behind me but there was no sign of him or the man.

“I’m convinced he snatched him. Where I was walking on the Bridgewater canal there’s a little path where it joins the Trans Pennine Trail and I think he grabbed his harness and dragged him away.” 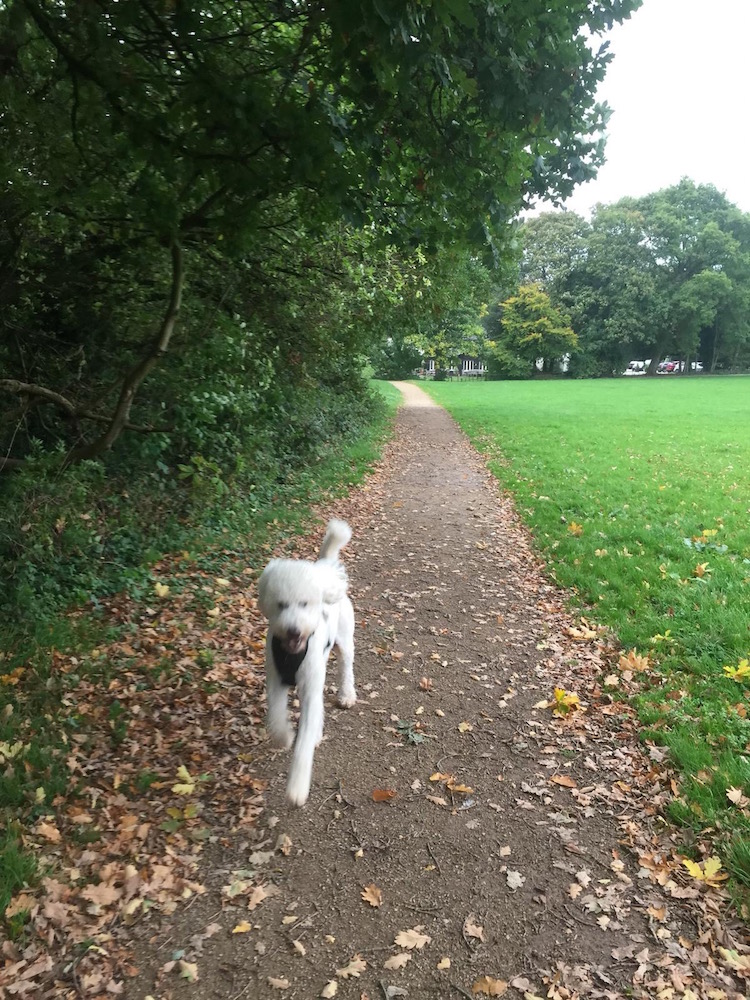 After half an hour she called her husband Stephen, 45, to help.

They both scoured the area, stopping dog walkers but no-one had seen him. Joanne, who is mum to Jess, 15, and Sam, 13, called the police and says they told her to put a post on social media and reported him as stolen.

Then, just over an hour after he’d vanished, they returned home and to their relief Hugo bounded over to the van.

Joanne said: “He was in such a state. He was soaking wet and covered in mud. I opened the door and he ran in and drank lots of water and collapsed on the floor.

“I was distraught and still sobbing, Stephen was in a state too and we were just so glad to see him but terrified about what could have happened.

“That night he was shaking and panting. I spoke to the vet and they said he was probably in shock, but thank goodness he was safe.

“Now, when we walk him, he cowers if people approach him or try to touch him. He was never like that before and he’s jumpy in the house too. I can’t imagine what happened.” 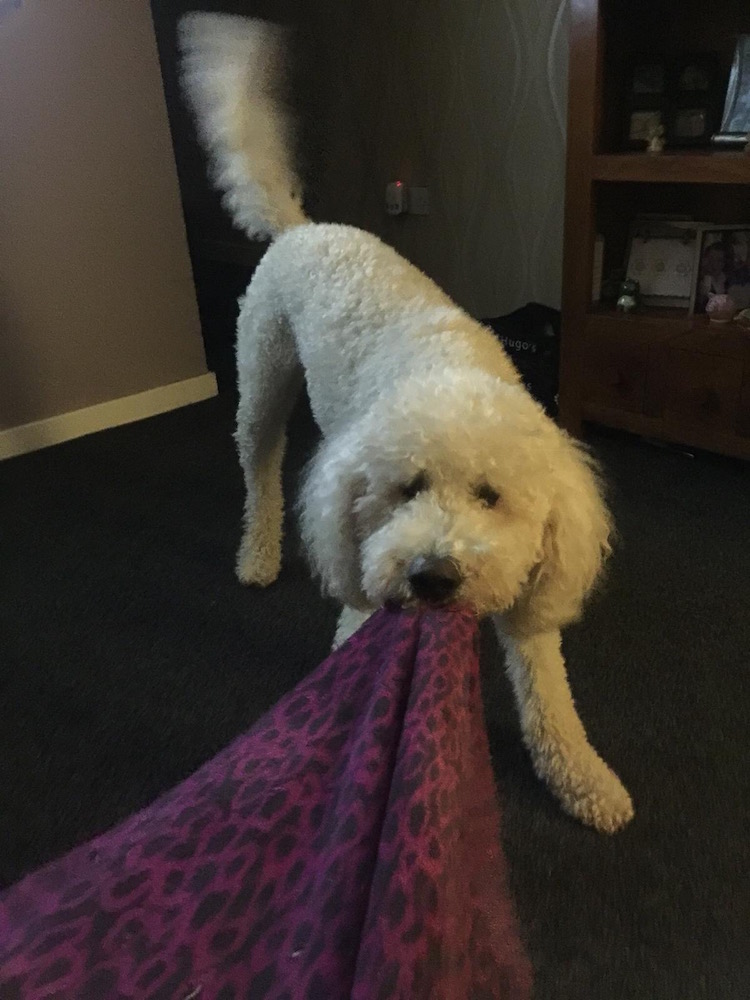 His chip would only have been scanned if he was found by the dog warden, handed in at a shelter or hit by a car.

His abductor could have sold him on or kept him as his own pet and even if he’d visited the vet, he wouldn’t have been given a routine scan.

Joanne said: “When I spoke to the police I said, ‘Well if he goes in the vets they’ll scan him and it will flag up that he’s been stolen.’

“But that wouldn’t be the case as organised gangs taking dogs to order and if they do take them to the vets, they don’t ask for them to be scanned!

“They said to get on social media because it would reach people in the local community and other dog walkers who may have seen him, and to contact Doglost.co.uk for help.

“I think it was an opportunist thief who took him and somehow, thank God, he got away. But what about the hundreds of dogs taken every day?

“I went on doglost.co.uk and there were pages and pages of frantic owners trying to find their pets. Many were ‘designer’ crossbreeds like Hugo, Labradoodles and Cockerpoos.

“A friend had his female French Bulldog stolen recently and fears she is being used as a breeding dog. But these dogs still see the vet.

Why don’t vets scan every new dog or cat when they come to the surgery? If they did it would help find thousands of missing dogs. 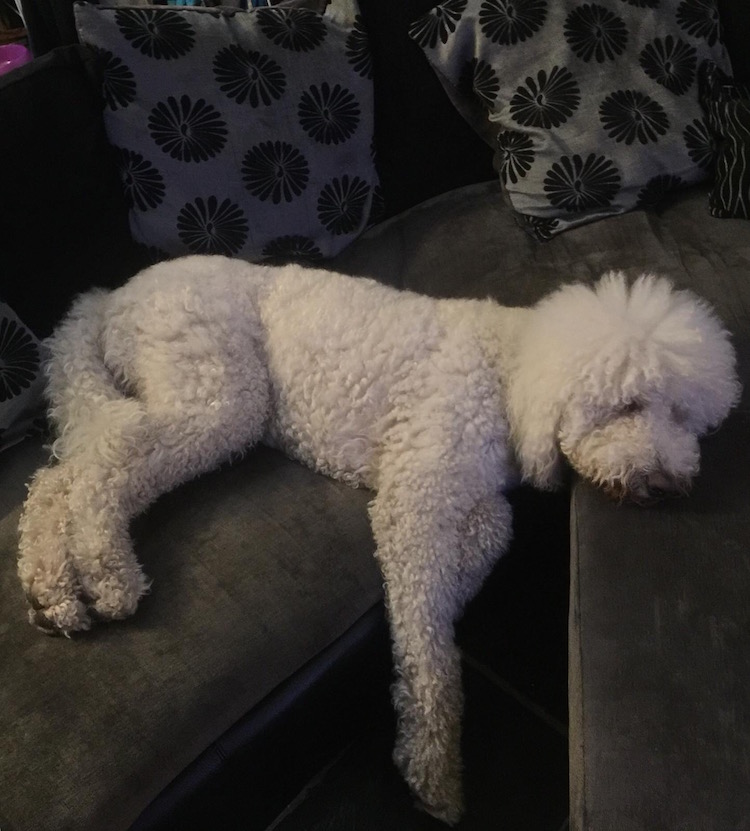 The British Veterinary Association recommends microchip scanning for every dog on their first visit to a practice but there is currently no statutory obligation.

Joanne’s crusade is supported by welfare campaigner Debbie Matthews who set up www.vetsgetscanning.co.uk in 2006 after her two dogs Widget and Gizmo were stolen in 2006.

She was able to launch a huge media appeal as her father was Sir Bruce Forsyth who pleaded with the public to help find her dogs.

Widget was returned after ten days and Gizmo after 11. Twelve years on Debbie is still campaigning.

She said: “It’s so frustrating because the government has had a huge campaign telling us we must microchip our pets. The vets tell us we must have them chipped and lots of charities too.

“But the only people who are likely to scan them if found are the wardens and the rescues. If you’re dog is lost and someone takes it into the vet, great, but what is stopping someone finding your dog and keeping them.

“People who steal dogs, professional thieves, are not deterred by microchips because they know vets don’t check them and there are even ways for them to re-register a chip without it being flagged with the original owner.

“It’s a huge loophole and something needs to be done. I would urge people to write to their MP and to speak to their vet and ask them about compulsory scanning for new patients.

“It’s frustrating that so much has been done with microchipping and the law, but it’s not protecting those who need it most – the animals that have been stolen.”

Both Joanna and Debbie are urging to sign a petition calling for the issue to be discussed in Parliament and for changes to be made to the law.

To learn more about what is being done to help stolen dogs, read Why Jayne set up Doglost after her own pet was stolen.