Dog killed as two are thrown on to M25 in Hertfordshire

A dog was killed and a second survived after they were thrown from a car on to the M25, the RSPCA has said.

It happened between junctions 20 and 19 for Kings Langley and Chandler’s Cross, Hertfordshire, at 18:30 BST on Sunday.

The charity said a lurcher-type dog was “killed instantly after being hit multiple times by vehicles”.

A small, male, black and white Jack Russell terrier escaped to the side of the road unharmed and was picked up by a motorist who pulled over.

RSPCA animal welfare officer Peter Warne said: “This is an absolutely outrageous thing for someone to have done and the danger that this act put not only the dogs in, but also the many people travelling on the road at that time, is just appalling.

“It is terribly sad the lurcher dog did not survive and was killed in such a horrific way.

“It seems this poor dog’s death was instant due to the speed that the vehicles were travelling at.” 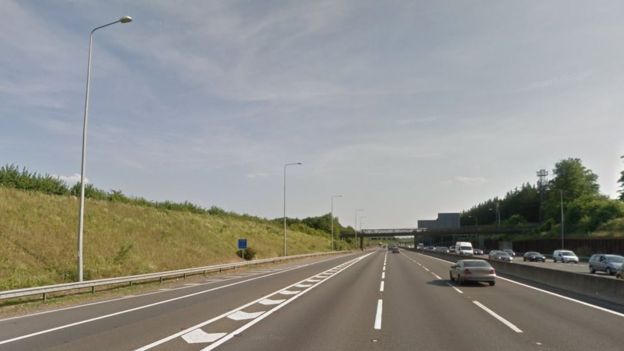 Witnesses were unable to give a clear description of the vehicle involved.

The rescued dog, thought to be between six and seven years old, has been nicknamed Tarmax by vets and is being looked after by the RSPCA while a new home is found.