×
Home / News / Discrimination: ‘I can’t take your guide dog, I’ve got an allergy’

Discrimination: ‘I can’t take your guide dog, I’ve got an allergy’

Discrimination against people with assistance dogs happens more often than you might imagine, and it never gets easier. BBC journalist Damon Rose tells his own story.

Last Friday, Transport for London took a mini cab driver to court for refusing to take my guide dog, and I was due to be the witness. The driver pleaded not guilty but, five minutes before the trial was due to start, he changed his plea to guilty. I won, I’m very pleased.

Over the years, I became fed up – as driver after driver refused to carry me and my dog. I took to getting my iPhone out sometimes to film as I attempted to make journeys. And then, one morning in May last year, I captured one such refusal on video.

When you watch the footage back, I am quite happy leaving the house – talking to my guide dog, telling the camera he’s sweet. He’s a small Labrador retriever cross, he’s three years old and his name is DeeBee.

As I walk towards where I imagine the taxi has parked, it plays out like a textbook case of discrimination – the kind that assistance dog owners are more than familiar with.

The driver greets me in a friendly manner and then he spots the dog.

I’ve learned that taxi drivers can’t just say they’re allergic and drive away. They need proof of their allergy because many would rather not carry a dog, perhaps not understanding that assistance dogs are highly trained and won’t jump all over the seats like an excitable puppy. 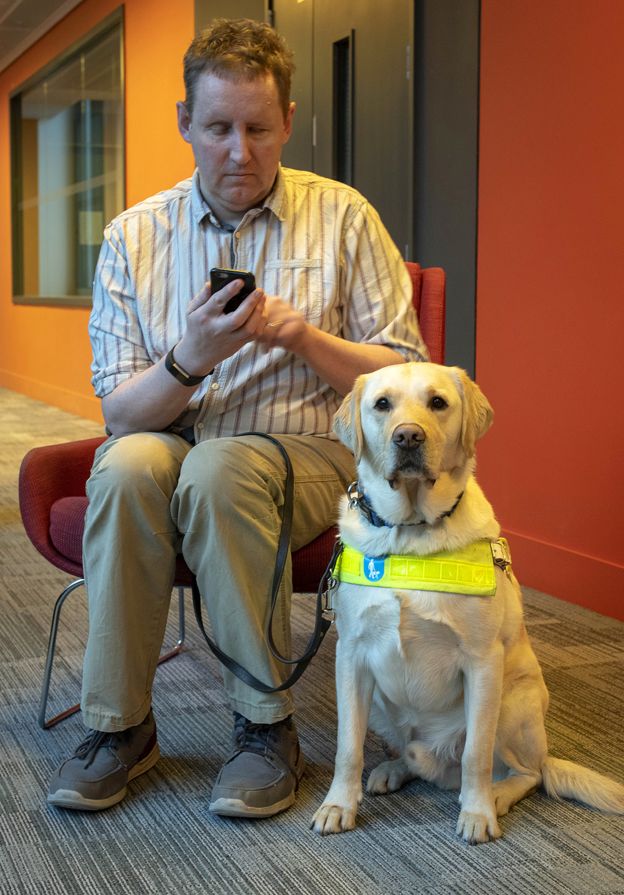 The Equality Act 2010 states that taxi and minicab drivers must carry assistance dogs unless they have genuine health reasons not to do so. Local authorities will provide a driver with an exemption certificate if they give proof from an appropriately qualified medic. The certificates should then be available to show to an assistance dog owner on demand.

The ability to read the certificates is, of course, a bit of an issue for many guide dog owners – but my plan was to capture his paperwork on film and show it to a colleague later.

So, I asked for his exemption certificate. The video shows him hunting through papers in his car and finding nothing – but he assures me he has an allergy and urges: “You can check with my GP.”

“I’m getting sneezy because I’m staying near the dog,” he says. “This is going to put me in danger of my health, and surely you don’t really want that do you?”

And indeed, I really wouldn’t want him to be harmed if he did genuinely have an allergy. But was he being harmed? Or was I being wronged?

“If it’s such a big health issue for you, you would have got an exemption certificate,” you hear me say on the video.

While being questioned in court, the driver maintained he had an allergy but, nine months on from the incident, was still unable to provide proof.

The driver worked for Uber but does not any more. If you open the Uber app, go to the menu, click on Help then Accessibility, you’ll see that Uber provides a specific space for assistance dog owners to report any issues arising when using the Uber partners taxi: “I want to report a service animal issue”.

This is how I have reported five refusal incidents in the past 18 months and have been called by friendly Irish-accented staff asking if I’m OK and then taking down details.

A survey of more than 1,000 assistance dog owners, conducted by Guide Dogs in spring 2015, found that 75% had been refused access to a restaurant, shop or taxi because they had an assistance dog with them.

My video footage helped me to get justice in this case.

TFL’s lawyer told the court the driver had claimed initially that I had been aggressive and had “chased” him – not easy to do if you are blind. She went on to say that the driver had conceded this was not the case, after having viewed the video in which I was very calm and measured.

The driver in the video I took has been blurred out – at my request. That’s not because he’s innocent – he’s not – but because he’s received a fine plus court fees which amount to almost £1,500 – and I think that’s punishment enough.

The reason I’m sharing the video is because disability discrimination is an odd beast and, to the untrained eye, may not look like discrimination at all. But what happens in this video is a criminal offence – when you become a cab driver, you sign up to this contract. If you don’t want to take dogs, don’t be a cab driver.

Minicab or private hire vehicle drivers (unless they have a medical exemption):

• Cannot refuse a booking, or refuse to carry out a booking, due to someone having an assistance dog with them

• Have a duty to provide a reasonable service