A pet owner has launched a desperate campaign to save her little dog who needs urgent cancer treatment costing thousands. Claire Blake, of Bristol, was left devastated when she heard the news that her eight-year-old Lhasa Apso, Barney, has an aggressive brain tumour close to his right eye. She was told on June 5 that Barney would have little over two months left to live unless he undergoes life-saving surgery and radiotherapy. But Claire was dealt another blow when she realised there wasn’t enough money left on her pet insurance policy to cover radiotherapy at £10,000, followed by brain surgery at £6,000.

Thousands had already been spent on CT scans, blood tests, biopsies and ultrasounds – some of which cost more than £2,000 each – to find out what was causing her dog to suffer severe weight loss. 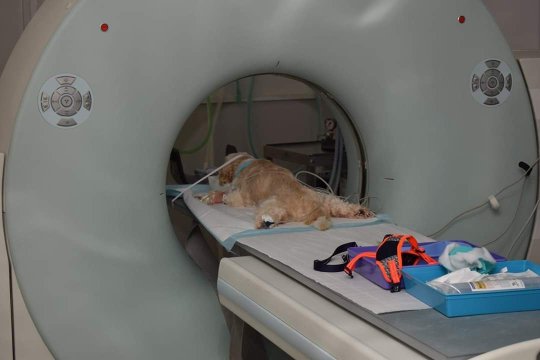 But this meant there was practically no money left on the plan to treat little Barney once he was diagnosed with cancer. Now the owner, who has had ‘loving and affectionate’ Barney since he was eight weeks old, is desperately trying to raise the funds by setting up a Go Fund Me page. Claire told Metro.co.uk: ‘We are absolutely desperate to make him better. ‘Without this treatment he will die – potentially within just a few short weeks. ‘But if he has surgery and radiotherapy he should be able to live a normal life expectancy, which is fantastic news. ‘Because he’s a young dog and he’s healthy in all other ways, he’s a good candidate for the treatment.’