More than 50 dogs have been stolen in Norfolk and Suffolk over the past two years, with labradors proving to be the most sought after breeds by thieves.

Figures from Norfolk Police reveal that 29 dogs were reported as stolen in the county in 2017 – more than double the number taken in 2016.

Across the border in Suffolk, the figure tripled to 12 last year.

Some of the breeds taken during that period include labradors, springer spaniels and Staffordshire bull terriers.

She said: “They can either sell the dogs on, breed them if they have not been spayed, or hang on to the dog for the reward to come up.

“But it is so distressing for the owners because as time goes on it is the not knowing which gets to you more than anything.”

Mrs Jermy said she was aware of four dogs which had been taken from Old Buckenham in the past 12 months alone.

Included in that figure is Daisy the yellow Labrador, who was snatched from the garden of a property on New Buckenham Road on November 21, 2017.

Five months on and the animal is yet to be returned. 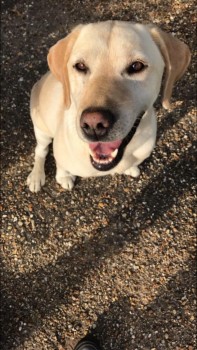 Figures from Norfolk and Suffolk Police show that Daisy was one of eight labradors taken in 2017, of which seven were puppies.

The list shows that three springer spaniels, two border collies and a chihuahua were also stolen in Norfolk last year.

In Suffolk, eight out of the 12 dogs stolen were returned last year, compared to two out of the four taken in 2016.

A Norfolk Police spokesman said: “Any crime where pets are stolen can be particularly upsetting for the victim and Norfolk Police will investigate these offences thoroughly.

“From April 2016 it became a legal requirement for all dogs to be micro-chipped and contact details kept up-to-date.

“This will make it harder for criminals who may look to steal a dog with the intention of selling it on.”

The RSPCA advised owners not to leave dogs outside shops or in cars alone.