×
Home / News / Dachshund before and after dieting.

Dachshund before and after dieting.

Dennis the dieting dachshund is downright svelte –after dropping a whopping 75 percent of his body weight.

The miniature dachshund wasn’t exactly tiny less than two years ago, when he tipped the scales at 56 pounds and couldn’t walk for more than a few steps before running out of breath.

The hefty hound went on a health kick after Brooke Burton adopted him from a relative who had fed him White Castle burgers, pizzas and other high-calorie fare with no regard to his ballooning belly.

Burton, 26, a nursing student, said she was shocked when she first saw Dennis.

“Out comes Dennis, and I couldn’t believe it,” Burton said. “I wasn’t even sure what breed of dog he was supposed to be because he was so large.”

Dennis began dieting on dry dog food and got plenty of exercise by walking – as well as lots of affection.

The 6-year-old dachshund, who now weighs a mere 12 pounds, is happily chasing squirrels and playing fetch.

“In the beginning, you could tell he was very depressed, that he really didn’t feel good at all,” Burton said. “He didn’t have much of a personality. After he lost weight, this bossy little demanding man popped out. He’s into everything, he wants to play with everybody.”

Dennis had to undergo three surgeries at Ohio State University Medical Center to remove folds of excess skin that got infected.

“We have an expression: food is not love,” Ham said. “Most of what your pet wants from you is affection and attention.” 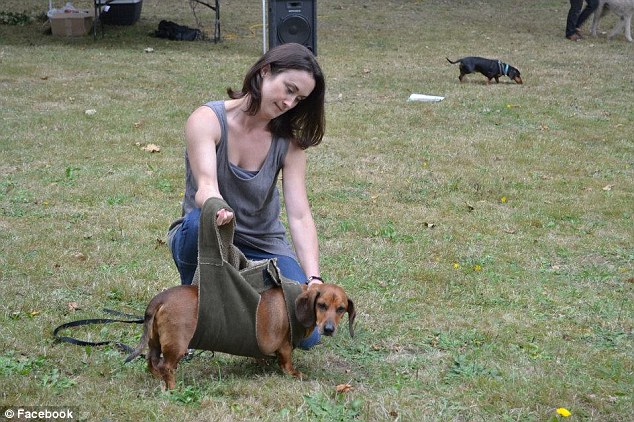 Dennis in his old harness.