This is the incredible moment a dog tried to drag a little girl to safety after watching her go underwater in the sea. Matyas grabbed his owner’s granddaughter by the t-shirt and pulled her onto the sand, near Gouville-sur-Mer, in France. But there was just one catch – the child hadn’t been in trouble at all, and was actually thoroughly enjoying herself as she played in the water. 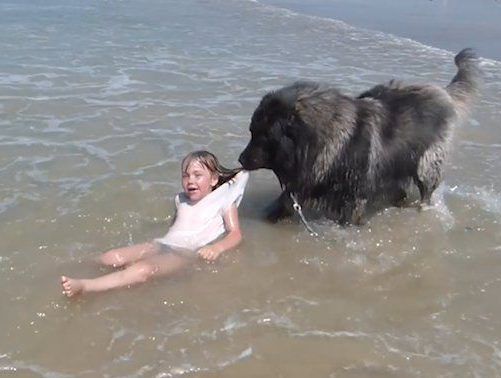 The footage of Matyas’ rescue attempt begins with the little girl laughing as she lies in the sea with her feet in the air. But soon a small ripple crashes over her face and the worried dog decides she has had enough splashing for the day. Gently latching on to her top, he pulls the child towards the beach until she is clear of the water’s edge. It is only then that he decides she is now safe enough for him to let go.

Luckily the little girl didn’t seem to mind, as she giggled continuously the whole way. The footage, filmed on August 3, has become a hit with social media users. Since its upload it has already gained over a million views and has been shared by thousands of dog lovers. 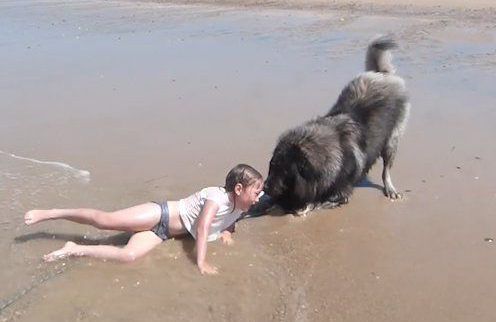 How clever is he as soon as the waves washed over her. He said no way your staying here! That’s why I love animals,’ commented one person on Twitter. Another exclaimed: ‘The faithful friend, the perfect babysitter!’ Although not everyone was impressed by Matyas’ quick thinking, adding: ‘I guess you can’t go to the beach with him if he’s going to be dragging you out of the water every time you’re having fun.’ It is unknown what type of dog Matyas is, with suggestions online including a Sarplaninac, Leonberger, Keeshond, or Newfoundland dog. Got a story for Metro.co.uk?