A dog has been rescued by firefighters after he got his head stuck in a cat flap. Luis the labrador poked his head through the flap but ended up getting stuck. He pulled the cat flap off the door, but his owner, Phil Mitchell, 57, was unable to remove it from his head. Phil ended up calling 999 and a firefighter used a saw to remove the plastic sleeve. 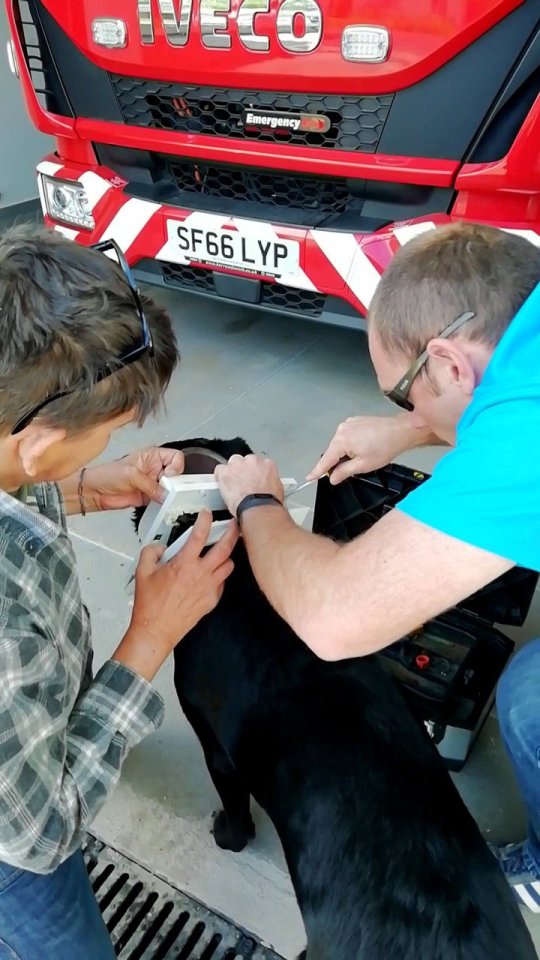 Phil, from Brampton, Devon, said: ‘We had a visitor from the council and we were standing in the porch talking.

‘Next thing we knew, we looked down and saw Luis poking his head through the flap. ‘We carried on talking when he must have put his head through too far. He tore the cat flap off the door completely trying to get out of it. ‘We tried to help him get it off but there was no way. It was jammed right on. ‘I didn’t know what else to do so I dialled 999 and asked for the fire service.’

Phil lives just down the road from the Cornwall Fire and Rescue Service depot in Brampton, which dispatched a firefighter on foot to Phil’s house.

Once on the scene the fireman was able to cut two-year-old Luis free using a saw. Ironically, Phil does not even own a cat – the flap was installed by a previous occupant of his bungalow.