Do you fret that your pet pooch is blamed by environmentalists for turning rainforests into poo in the park?

Have no fear – you can now fatten Fido on black soldier flies instead of Brazilian beef.

A pet food manufacturer now claims that 40% of its new product is made from soldier flies.

It’s one of many firms hoping to cash in on the backlash against beef by people concerned that the cattle are fed on soya.

These soya plantations are responsible for the release of greenhouse gases in significant quantities.

Is it good for the dog?

The key question is whether a diet of 40% soldier flies meets the nutritional needs of your beloved canine.

We put the question to a pet diet expert at the Royal Veterinary College, Aarti Kathrani. Her conclusion was a cautious “yes”.

“Insects can be a very useful source of protein,” she told us. “More studies are needed to show how much of these nutrients can actually be absorbed by a dog’s body – but some studies suggest that insects can provide nutrients for dogs.”

Does it help the climate if dogs eat flies?

At first sight it seems obvious that feeding your dog meaty food is bad for the environment. The link between humans eating meat and the allied emissions of CO2 and methane is well established – and pets are estimated to eat 20% of global meat.

It’s also true that flies produce protein much more efficiently than cows – using a small percentage of the water and land.

But actually the analysis is more subtle than that – because as societies become more wealthy, people often turn to muscle meat and reject the animal’s offal. 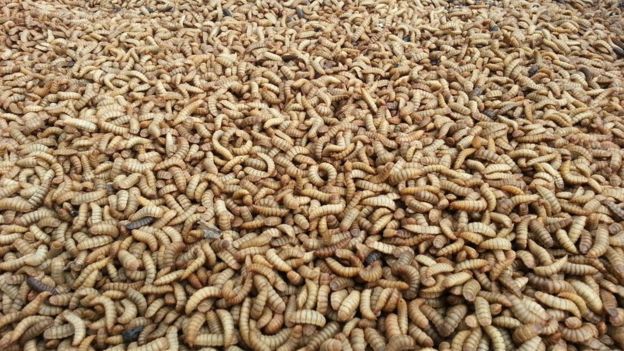 In fact, if dogs were weaned off meat and on to insects, the industry would have to find another purpose for the offal. More sausage, perhaps? Or more humans eating insect protein. Or more going vegan?

Could cat food be made out of insects, too?

Dogs are omnivores – they eat more or less anything. Cats are much more choosy, because they can’t make an essential amino acid, taurine. They find it instead in meat and fish.

But Dr Kathrani says studies show that insects do contain taurine, so it’s possible that insects could also form a useful part of the moggie diet.

The new product is from Yora, a UK start-up. The insect grubs are fed on food waste in the Netherlands.

There are several competitors which also produce pet food incorporating fly protein. They include Insectdog, Entomapetfood, Chippin and Wilderharrier.