The show will be aired next Saturday evening, November 3, when the larger of the boisterous displays are being held.

Dog-lover and former BBC Breakfast host, Bill Turnbull, will present the show that he described as a ‘safe haven on the radio’ for pets.

Research suggests that classical music calms dogs after studies were conducted in re-homing centres where the soothing music was played into pooch’s kennels.

Turnbull, 62, said that pet owners were increasingly frustrated this time of year because ‘firework season now seems to go on forever’.

The RSPCA has called for restricted firework use after the number of complaints they received has more than doubled in the past seven years.

The RSPCA also wants the maximum noise level of fireworks for public sale reduced from 120 decibels to 97 ‘to further reduce the stress of the animals’.

Turnbull, who has three black Labradors of his own, thinks the special Classic FM show will go far in a way to sooth petrified pups and their owners, too. 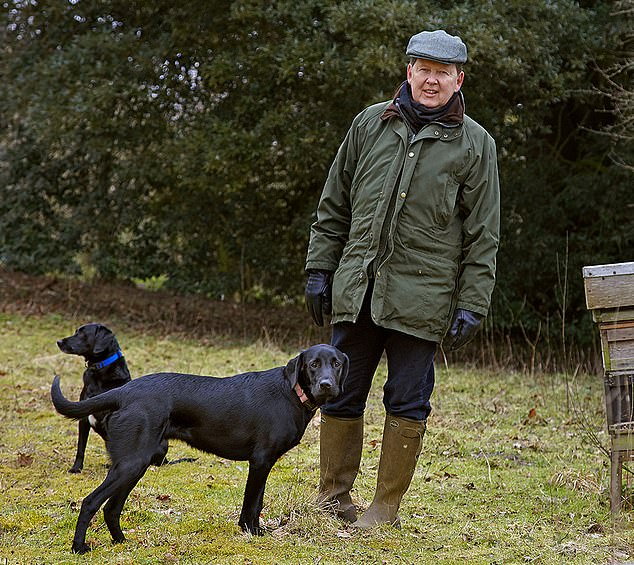 He said: ‘When everybody will be having their displays we thought it would be a good idea to have a programme especially for pets.

‘And people too – any listeners who don’t particularly like fireworks.’

Turbull, who is suffering from incurable prostate cancer, is a well-known dog-lover whose three black Labradors are called Nina, Bonnie and Lola.

He said: ‘I always tell my wife, you can have any dog you like as long as it’s black and a Labrador.’

The animal shelter, Battersea Dogs and Cats Home has been consulted about Turnbull’s show and will play it to its residents over the fireworks period.

Turnbull revealed earlier this month that he has had 10 rounds of chemotherapy in a bid to stop his cancer, which has spread across his pelvis, hips, legs and spine.

The 62-year-old also revealed he asked doctors to stop his treatment.

He said: ‘I asked the consultant to release me from the treatment. I just couldn’t bear it any longer.’ ‘It’s the fact that having cancer is so relentlessly boring. You go to bed at night thinking about it, and it’s still there when you wake up.

‘It’s there all day, every day – a fact of life you have to get used to. And it’s a massive pain in the backside,’ he added.