Police have reunited stolen dogs with their owners.

The dogs, Sean, Sue and their one-year-old puppy Nel were stolen from the back of their owner’s pickup truck in Leicestershire on Tuesday morning.

Their owner, a farmer from Nottinghamshire, reported the trio of Border Collie X Kelpie dogs missing to police and immediately launched an online appeal for their safe return.

Later that day, puppy Nel was found hiding under a car in Willingham and taken to a local RSPCA centre, who scanned the pup and returned her to her owner the next day.

The online appeal was updated with the news which caught the eye of a Willingham resident, who had heard the sound of distressed dogs barking nearby.  They contacted the owner, who could still hear the dogs in the background and identified the bark as coming from his dog Sue.

Following a call from the dogs’ owner officers, PC Adam Price and Ben Suckling, visited the area with photographs of the dogs and found them. 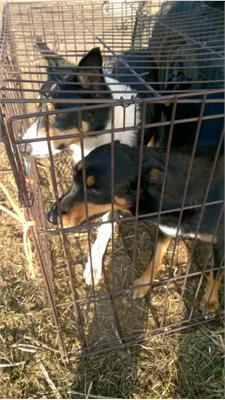 Their owner came to Cambridgeshire to collect the dogs and take them home.

PC Price said: “As a pet owner I was over the moon to get these dogs back home.

“I would like to commend the resident for their quick thinking which enabled us to reunite these dogs with their owner.”

All three dogs are well and happy to be home reunited with their family.