Boy, 11, ‘thought he would die’ in bull terrier attack

A boy has described the moment his arm was ripped by a dog so badly that he could almost see his own bone. Cooper Johnstone, 11, says he thought he was going to die when he was mauled by the Staffordshire Bull Terrier attacked him last Wednesday. He also suffered puncture wounds to his chest as well as injuries to his hands. His father Ellis Johnstone described how his son was preparing a ‘little afternoon’ in a paddling pool with his friend when he went to call for him at about 1pm. Around 10 minutes later Mr Johnstone, 46 and from Ormskirk, west Lancashire, got a call from his daughter saying Cooper had just been bitten by a dog.

he said: ‘I ran straight around and went in [to my daughter’s house]. One of the neighbours had got a towel and put it around his arm.

He was sitting there just screaming with pools of blood everywhere. He was just screaming.’ He added his son was left traumatised by the attack and thought ‘he was going to die.’ The boy was taken to Alder Hey Children’s Hospital, where he stayed until Sunday. He will need to go back on Tuesday so doctors can assess the best way to treat his arm wound. Ellis said: ‘I want to raise awareness of what can happen, whether it’s a family pet or a kid with a dog. It’s about raising awareness of what dogs can do. He could have been dead.’ 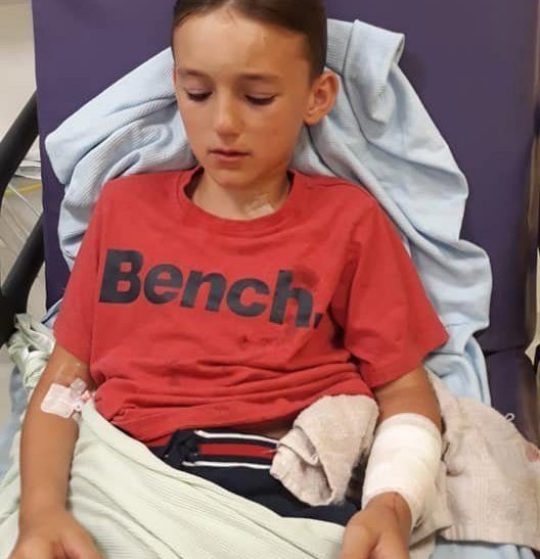