A rescue puppy has moved out of a dog shelter and into Downing Street to join Boris Johnson and girlfriend Carrie Symonds. The 15-week-old Jack Russell-cross, who has been called Dilyn, has been taken in by the PM after being abandoned by puppy farmers. Carried in a small red basket, the little dog looked timid as he got ready to settle into his new home this morning, after being moved from Friends of Animals Wales in Rhondda. Little Dilyn will be starting his new life with ‘dog lovers’ Mr Johnson and Ms Symonds in their flat above No 11 – just one door down from Larry the cat’s home. After Downing Street staff voted to have a dog, campaigning TV vet Marc Abraham introduced Ms Symonds to the work of the Wales-based rescue centre. The shelter has been keen to promote Lucy’s Law, which will crackdown on puppy farming. 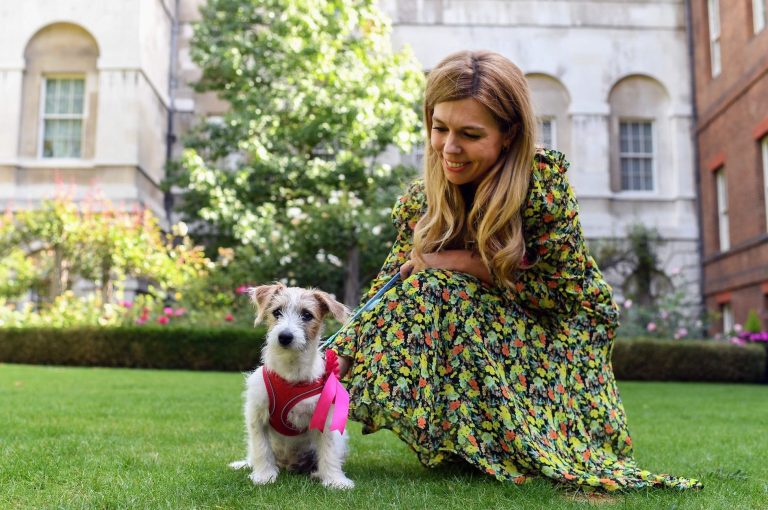 The PM and girlfriend Carrie Symonds have named the pup Dilyn (Picture: PA) He will move in one door down from Larry the cat (Picture: Reuters) Ms Symonds welcomed Dilyn into the home this morning Volunteers at the shelter, including founder Eileen Jones, sent the couple a shortlist of dogs to choose from and they set their heart on the little Jack Russell-cross. Mr Abraham told the BBC: ‘When I was speaking to Carrie about what dog to get and where to get it from, she gets it. She is a massive supporter of the Lucy’s Law campaign. ‘Carrie and Boris are helping to get a very, very vulnerable dog that’s otherwise likely to be killed. ‘They are both massive dog lovers.’ However, we’re not so sure Larry the Tabby cat, the nation’s favourite political pet, will be best pleased at the arrival of the new animal on the block. Little Dilyn was proudly wearing an anti-puppy farming rosette Ms Symonds found out about charity FOAW after TV vet Marc Abraham introduced her to founder Eileen Jones The little pup was saved from puppy farmers (Picture: FOAW) Larry’s official Twitter account posted: ‘Confirmation that Downing Street is going to the dogs…’ But Mr Abraham isn’t worried about the pair, adding that Dilyn has been living in a foster home alongside a cat and is already house-trained. Founder of FAOW Ms Jones said it was a ‘dream come true’ that the puppy, which had been staying with them at the shelter dubbed ‘Wonky Towers’, has been re-homed. She added: ‘We knew that Carrie Symonds has always been a huge animal welfare advocate and we are absolutely overjoyed that this gorgeous pup will be living his best life with Carrie and the Prime Minister at their Downing Street home. ‘To think our little ’wonky’ pup started his life in a Welsh puppy farm and was destined for an uncertain existence at the hands of a puppy dealer, but is now going to be with people who absolutely adore him is a dream come true. The dog has moved from an animal shelter to Downing Street (Picture: FOAW) ‘This little man will want for nothing in his life, what could be better than that?’ Lucy’s Law which will ban will be introduced in England from next year, while the Welsh Government has confirmed it too will adopt the law but has not yet set a date. ‘We know only too well why Lucy’s Law is such an important piece of legislation because we pick up the pieces of third-party puppy selling every day,’ continued Ms Jones. ‘The suffering of these dogs is unimaginable unless you see it first-hand as we have done for so many sad years. She added: ‘We wish them a lifetime of happiness with their new best friend’.