×
Home / News / Ben the Cavachon rescued from Cairngorms in Scotland

Ben the Cavachon rescued from Cairngorms in Scotland

While out on an essential training mission the Inverness Coastguard helicopter crew were able to effect an heroic rescue of Ben the Cavachon missing near Loch Avon in the Cairngorms. This from the Maritime and Coastguard Agency Facebook page:

“Today whilst out on essential training, our Inverness Coastguard helicopter crew were presented with an ideal opportunity to test their winter flying skills.

A little dog, who had been missing for 48 hours in the terrible weather conditions of Storm Gareth, was spotted on a narrow ledge with a 200ft vertical drop below by the Coastguard helicopter crew.

To put their winter skills to the test, the two Winchmen were dropped off at a nearby bothy to undertake essential medical training in the snow.

The remaining helicopter crew flew off to simulate a refuel and as they circled 1000ft up Loch Avon in the Cairngorms, a nearby section of cloud cleared and they happened to spot the dog perched precariously on the ledge.

The helicopter crew noted the position, went back to collect the two training winchmen and returned to the stranded dog. The weather had luckily presented them an ideal window of opportunity to use the rest of their training time to rescue the dog!

Little ‘Ben’ was terrified and cold, so it was flown to the nearby Glenmore Lodge who then rushed it to the Strathspey Veterinary Centre. We have since heard that the dog is doing well and has been happily reunited with its owner.” 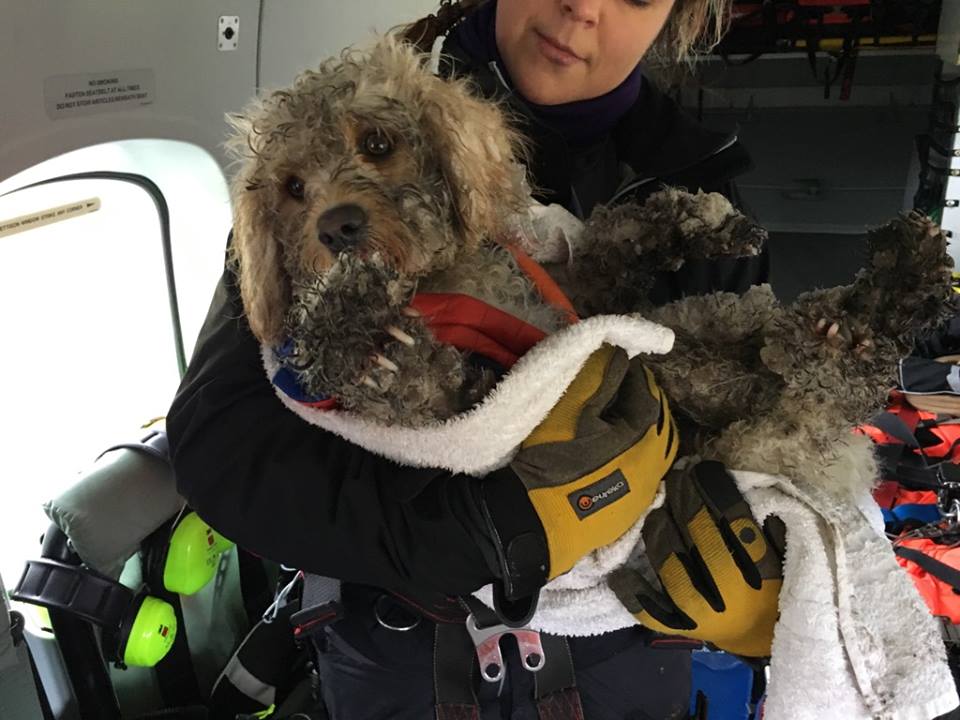