×
Home / News / Belt up boy! How driving without properly securing your dogs, cats or other pets could land you with a £5,000

Belt up boy! How driving without properly securing your dogs, cats or other pets could land you with a £5,000

Pet owners who allow unrestrained animals in the cars while driving risk a £5,000 fine and invalidating their insurance.

About two thirds of UK drivers are unaware that letting pets loose in their cars could result in such penalties, research suggests.

Insurance experts are warning people heading out for family breaks this half-term to ensure pets travelling with them wear a seat belt.

And one in 10 motorists have either had an accident while driving with a pet, or know somebody who has. 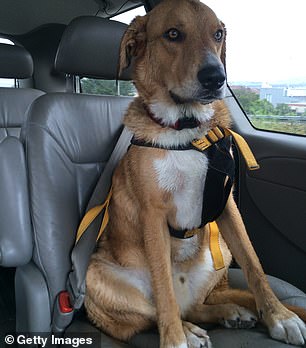 One told Confused.com their dog jumped out of the window when the car stopped at traffic lights.

Another reported that they were fined when their canine climbed into the front of the vehicle.

Cats have also been known to introduce an element of danger – with one motorist saying their pet nestled in the footwell by pedals after breaking free from its box.

Allowing pets to hang their heads out of windows or letting them ride without a seat belt is illegal, according to the Highway Code.

Rule 57 reads: ‘When in a vehicle make sure dogs or other animals are suitably restrained so they cannot distract you while you are driving or injure you, or themselves, if you stop quickly.

Highway Code breaches do not mean direct penalties. However, police may pull drivers over and fine then £1,000 for not driving with proper control if motorists are distracted.

And failing without due care and attention carries a maximum fine of £5,000. It could also mean nine penalty points or a driving ban with compulsory re-testing. Any accident will likely leave an insurer unwilling to pay out.

Confused.com’s motoring editor Amanda Stretton said it was particularly important for drivers to heed the rules while travelling during the half-term break. 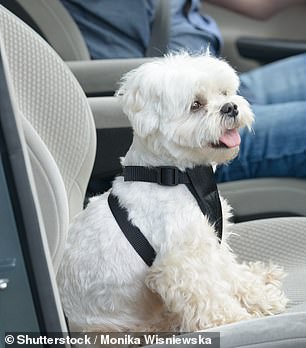 Many drivers will be joined by four-legged companions as they set off on trips across the UK,’ she said.

‘But drivers must restrain their dogs properly, or they could receive fines up to £5,000.

‘Driving with an unrestrained pet can also invalidate your car insurance, meaning having to personally pay out for repairs in the event of a claim.’