They’re supposed to be the most loyal pets around. But one dog has been allowing a bear to rummage through his owner’s trash – in exchange for deer bones brought for him by the animal.

Taking to Twitter, author Jesse Jordan, from Canada, posted a photo of Brickleberry, the mastiff-hound mixed breed, lazily enjoying his gifts beside a pile of rubbish on the ground. He wrote: ‘My idiot furry son has one job at night – bork at things and make them go away. Easy, right?

HOWEVER, a bear has learned that my furry son can be bought. This is the THIRD TIME he’s been gifted deer bones in exchange for being allowed access to my trash, AND HE KEEPS DOING IT.’

Jesse then joked that he clearly had no choice but to ‘impeach him’ as a result of his behaviour. He said: ‘Although I basically handed my dog this position of power, it’s become very clear that he has no idea how to actually do the job properly. 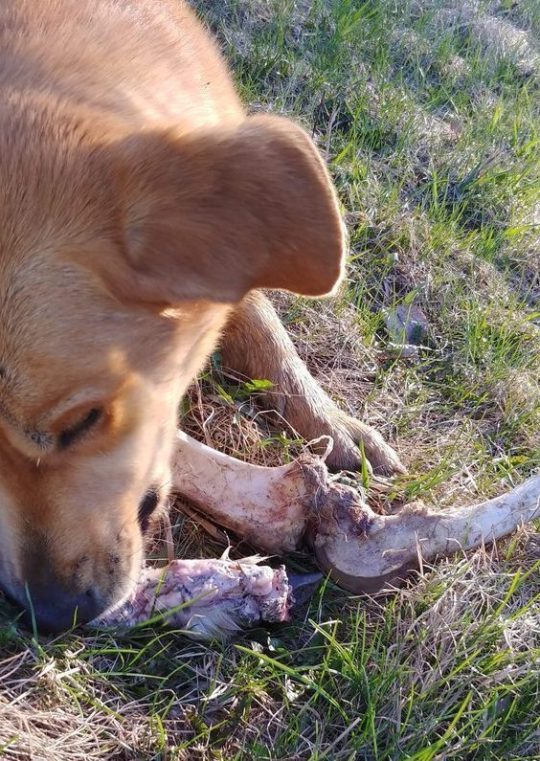 ‘Now not only do I have to clean up a huge mess, I see him putting his own self-interest first.’ But, he added that the Brickleberry, who also goes by the name Brick, was not in any danger, describing black bears in the area as ‘giant goofy raccoons’. ‘He is the best boy. His mum died days after he was born, so I raised him by hand,’ he said.

‘He is great with kids and apparently bears.’ Jesse’s tweet has already been liked more than 80,000 times, and shared by more than 22,000 people.

One person teased: ‘This just sounds like you’re not paying him enough. If the bear is offering a better deal, you can’t blame him for taking it. Capitalism.’ Another added: ‘I’m not sure if I’m more impressed by the bear or the dog… or horrified that the Great Animal Conspiracy is moving into its second phase…’ A third suggested: ‘That bear is a true business man, put a suit and list of jobs in the trash next time so he can move up in the world.’ While a fourth just joked: ‘Would not convict.’