Beagle is surrogate mum to two kittens and even breastfeeds them

Beagles are known for their loyalty and kind nature, with their friendliness also being a common trait. This particular pup, however, has gone above and beyond in her friendliness, and has become a surrogate mum to two kittens. Daisy, who is one year old and lives in Staplehurst in Kent with owner Jane Whitton, bonded with the kittens immediately when they were brought home. Although Jane, 36, had initially planned to just get one kitten, she decided on two when the farmer who originally owned Fletcher and Dexter couldn’t rehome them both. She said: ‘The farmer where the kittens come from didn’t want to keep them but wanted to find homes for them with people he knew. We were originally just going to get Dexter who’s ginger. 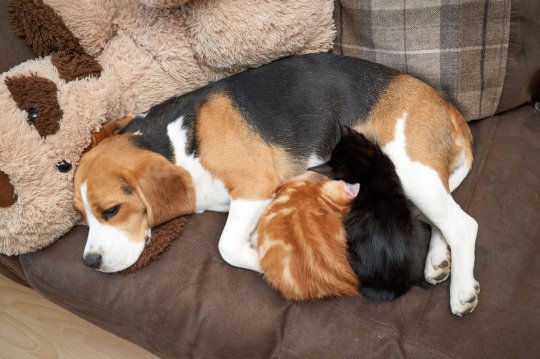 ‘But when we went to get him we could see this little black kitten at the back all on his own. My heart melted. We thought ‘sod it’ and decided to get him too.’

That snap decision had now resulted in Daisy falling in love with the kittens, and she even started producing milk and breastfeeding them. ‘We told the kids and Daisy to be gentle with them as they’re so tiny but she’s just instantly taken to protecting them,’ said Jane.

‘If our other dog runs at them she’ll get them into the middle. They’ll sleep with her and and she’ll sniff them over to make sure they’re OK. Recently she’s even started producing her own milk and nursing them which is pretty extraordinary.’ Jane calls Daisy the cats’ ‘protector’ and ‘surrogate mum’ due to the maternal bond she has with them. It’s unclear why Daisy began lactating when Fletcher and Dexter came into her life, but it’s perfectly safe for dogs to breastfeed cats. It may be that the boys simply weren’t ready to be weaned yet, with the Beagle taking on the responsibility as she saw fit.