Just a few minutes after we posted about Bailey being moved to a temporary foster home today we received this ASTOUNDING news from Nicola Jones, Bailey’s foster mum.

“Bailey arrived at 12.30 today, and I settled him into the house. He has been as good as gold, friendly and excited to be away from kennels, but no trouble at all. He settled down on his new bed and took a short nap.

At about 3 o’clock he woke up and started barking and sniffing the air. He seemed anxious and unsettled, which I put down to the change of environment, so even though it was pretty warm outside, I put his lead on, and took him out to walk him in a shady area. I was quite surprised at how keen he was to get out as I was told he was an older dog and fairly chilled.

We walked along my road towards the path leading to Hendre lake – I intended to take him in the opposite direction but he insisted he wanted to go that way! As we approached the end of the road Bailey stopped dead in his tracks, and started barking again. He wouldn’t move, wouldn’t budge, and I followed his gaze ….

Imagine my horror when I saw smoke, then what was clearly a fire blazing in someone’s back garden. I knew immediately it wasn’t a ‘normal’ back garden fire and rang the fire brigade. 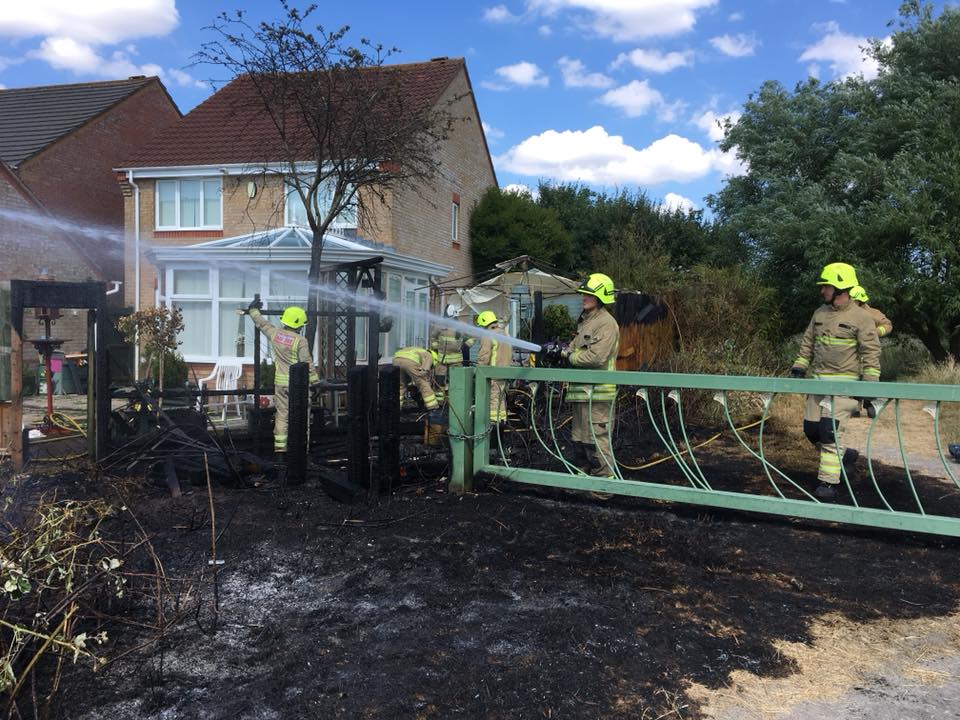 They arrived in minutes, and extinguished the fire which had already destroyed a pagoda, shed, pergola, fencing and bushes. If the fire-fighters had not responded so quickly the conservatory and house would have gone up in flames. The fire had taken hold and there were literally seconds to spare before fire reached the house itself, having burnt everything in it’s path.

By the time the fire-fighters arrived there was a crowd of anxious neighbours and children around. Bailey simply stood by calmly, as if to say ‘Yeah, I’ve done my bit, over to you now chaps’

Bailey and I are now back home. I am still trembling, but Bailey seems to have taken everything in his stride, and he’s wondering what all the fuss was about!”

We are soooooo proud of our mild-mannered, superhero dog Bailey! If this doesn’t win him the most fabulous retirement home ever we don’t know what will!

Bailey needs a permanent forever home, a family to love and protect for the rest of his days. It’s what staffies do