Amos was born blind at a dog’s home. Despite life serving the adorable Staffordshire bull terrier cross a cruel hand, his luck turned when he met Jess Martin. The 27-year-old, who works in HR for Cheshire Fire and Rescue service, volunteers at the rescue centre in her spare time and that’s where she fell in love with Amos. She realised that it would be difficult to rehome a blind dog, and so decided to adopt Amos with her partner Billy Howe, 27, in August last year. However, she was wary of how her border terrier, nine-year-old Toby, would react when he met his new brother. It turns out she needn’t have worried. The pair quickly became best buds and Toby is now Amos’ unofficial guide dog. He defends Amos from other dogs, helps him find his water bowl and protects him. 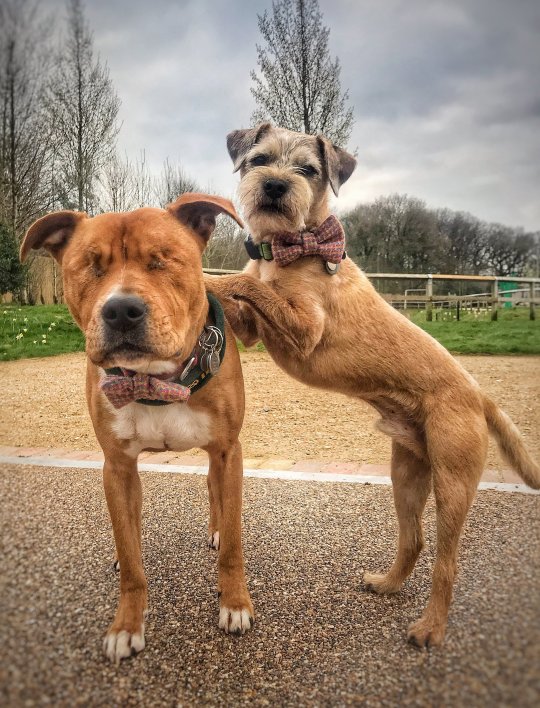 Toby was the best present I ever got,’ said Jess. ‘He is very independent, and he likes his own space so we were a bit concerned to see how accepting he would be of Amos. ‘I thought it would be very difficult to find an owner and while Amos was on medical care for four months, we decided to foster him in February last year but after a while we realised we would never give him back. ‘At the beginning Toby growled at him a few times and then ignored him – Amos came from a kennel so doesn’t know how to socialise with other dogs. ‘After a couple of days, I saw that Amos couldn’t find his water bowl and Toby nudged him and helped him out.’