Abused dog found lying next to decomposing bodies of its sibliings

Upsetting photos reveal how the RSPCA discovered a badly abused and emaciated dog lying next do the decomposing bodies of its siblings. The one-year-old terrier refused to leave the sides of the two other animals after they had been abandoned in a kennel. The RSPCA said it was releasing the graphic pictures to highlight the issue of animal abuse and attempt to catch the people responsible. Warning: This article contains photos of animal abuse that some may find upsetting. 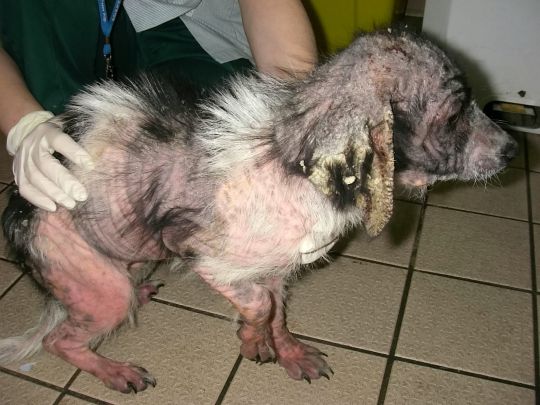 An inspector who visited the scene, in Runcorn, Cheshire, described it as ‘the saddest sight I have seen in 12 years in the job’. Gareth Forshaw discovered the animals after his own dog repeatedly barked in the direction of the kennel.

‘When I peered inside I could see two dead dogs and the smell of their decomposition hit me,’ Mr Forshaw said. ‘Me and a neighbour went to get some water and food for the poorly dog and backed away from the kennel. ‘She then came out from where she was hiding and drunk all the water and ate all the food before jumping back in the kennel and laying on the dead dogs.

‘She was so scared. It was awful and really upsetting for all the neighbours who were trying to help, especially as we knew she had been left with the dead animals which were probably family members.’ After calling the RSPCA the neighbours managed to put a dog lead on the terrier so she wouldn’t run away.

There was another dog outside the kennel that ran off when he approached, he said. Inspector Lisa Lupson, who attended the scene, said: ‘It was truly horrendous, the poor dog was so ill and frightened. ‘She still wanted to be with the dead dogs, which we believe were her siblings. 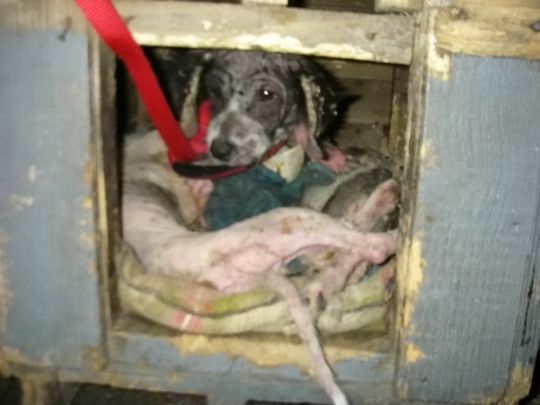 Initial reports suggest they had been dead for a number of days.’ The sick dog was rushed to Greater Manchester Animal Hospital where she is being treated for severe mange and weight loss. Lisa added: ‘She is the sweetest little thing. ‘When we got to the hospital I gave her biscuit and in spite of all she had been through she wagged her tail, so we’ve decided to call her Biscuit.’ The RSPCA would like anyone with information about this incident to call their appeals line on 0300 123 8018