A kind stranger bought a £400 wheelchair for a puppy so that she can get around easily – because she keeps getting tangled with her six legs. Owner Lauren Salmon said the complete stranger offered to pay for Roo the six-legged Labrador’s wheelchair because her own dog had just died. Lauren said the kind lady wanted to do ‘something good’ in its memory so bought Roo a wheelchair to improve her mobility, because she gets tangled up with her extra front legs.

The ten-week-old pup was given her name because she jumps on her back legs like a Kangaroo.

Before getting her new wheels, Roo’s two extra front limbs meant she dragged herself around on her elbows with her bum raised in an ‘army crawl.’ Lauren, 33, from Orpington in London, said: ‘I’m shocked at the amount of generosity from people and the attention she has received in the press. ‘When you Google it her name comes up in Poland and America and people have nicked her video and posted on YouTube.’ Lauren’s son, Luke, 15, wanted a new dog and was determined to take the special pup home after seeing her online last month. He was worried she might be used as bait in dog fights. The pair are now best friends and the puppy has helped Luke, who suffers with psoriasis, with his confidence. 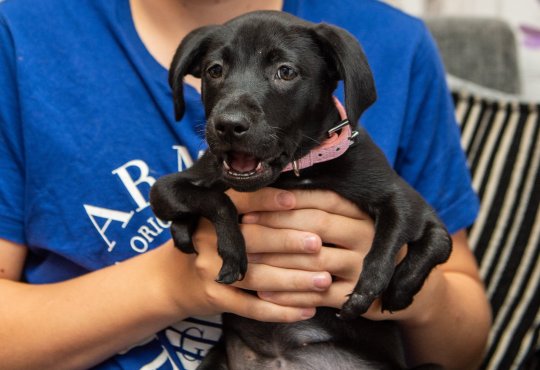 Lauren added: ‘Luke has cut the paper cuttings out of the News Shopper and the Metro and kept them. ‘He is happy people are becoming aware of animals born with extra limbs and he hopes people won’t look to destroy them in future.’ The mum-of-four welcomed the offer from the anonymous donor who will soon meet Roo on a walk.