×
Home / News / 2.7 Million Pet Owners in the UK Are Told Their Pets Are Overweight

2.7 Million Pet Owners in the UK Are Told Their Pets Are Overweight

Our latest research reveals pet obesity is on the rise across the UK. In the last 12 months alone, 2.7 million pet owners have been told their dogs (1.7 million) or cats (1 million) are overweight. This is one in eight (12 per cent) dog owners, a rise on the eight per cent who were told their dogs were overweight over the two years previously, highlighting it is a growing issue. 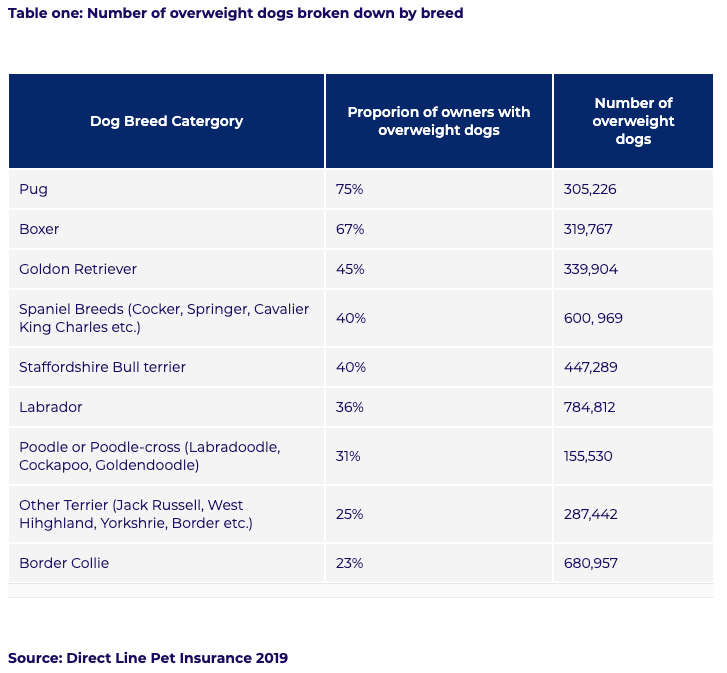 Our research contains useful insights such as:
• 83% of vets reported an increase in the number of overweight pets being brought to see them.
• Both vets and pet owners have also reported injuries as a result of handling these pets – 54% of vets are concerned about injuring themselves in this way, and 1.2 million dog owners have reported muscle strains, broken bones, and even spinal injuries due to handling overweight pets.
• Further statistics show that 1 in 8 dog owners have been informed their pet is overweight, and (according to vets) 50% of owners believe that vets are being overly cautious about obesity. Vets say that 30% of owners don’t regard obesity as a problem in animals at all.
• Percentages of owners with overweight dogs organised by breed. Pugs top the list – with 75% of them being overweight. Border collies are at the bottom of the table – only 23% of owners have an overweight pet.

You can view the original article (by Direct Line) here.